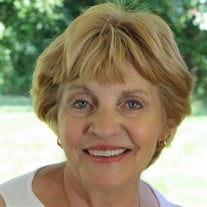 HOLDEN- Jeanne M. (Lortie) O’Hara passed away peacefully on Saturday, December 25, 2021, in the loving care of her family and the compassionate staff at Dodge Park Rest Home and Notre Dame Hospice after a lengthy battle with Alzheimer's. She was 84. Born and raised in Northbridge, Jeanne was the daughter of Canadian immigrants, Lucien and Antonia (Montigny) Lortie and lived 61 years of her life in Holden. She is lovingly remembered and missed by her husband of 62 years, Paul F. O’Hara; two sons, Michael P. O’Hara and his wife, Sandra of Virginia Beach and John L. O’Hara and his husband, John Flanagan of Boston; five daughters, Cathleen O. Schmidt and her husband, Craig of Charlton, Lisa A. Brennan and her husband, Joseph of Madison, CT, Patricia M. Lacasse and her husband, Bruce of Douglas, Nancy E. Gunnard and her husband, Eric of Rutland and Meghan M. Maceiko and her husband, Michael of Rutland; 15 grandchildren, Brian Schmidt, Colleen Ouska, Laurel Soltys, Paul and Meghan O’Hara, Kerry, Morgan and Paige Brennan, Stephannie and Erin Lacasse, and Annika, Evan, and Collin Gunnard and Daniel and Kathryn Maceiko; three great-grandchildren, Jackson and Thomas Ouska and Addie Soltys; nephews and nieces. Besides her parents, Jeanne is predeceased by twin grandchildren, Jonathan and Elena Maceiko, and two sisters, Doris Burns and Rita Benoit. After graduating from Northbridge High School in 1955, Jeanne went to work for State Mutual Life Assurance Company in Worcester where she met and fell in love with her soon-to-be husband, Paul O’Hara. They met in May of 1957, were engaged in May of 1958, and married a year later on May 2, 1959, at St. Patrick’s Church in Northbridge. They moved to Holden in 1960 where they raised their seven children. Jeanne was an exceptionally devoted mother and wife. She cherished the time spent raising her family and was always the central figure in their lives. She was a beautiful example of love and strength. While in words she was humble and caring, her actions were bold and powerful. She led by example and taught through her actions. Jeanne was a faithful woman. Her strong will and unwavering faith carried her throughout her life, particularly when faced with her diagnosis of Alzheimer's Disease. Her family will remember her dancing in the kitchen with Paul, her holiday traditions which included forgetting to give at least one Christmas present every year, and praying to (and sometimes bribing) St. Jude. Once she became a Memere, her greatest joy was spending time with her grandchildren. Her children fondly remember summer vacations in Hampton Beach and spending time together at their summer home in Falmouth. During their retirement years, Paul and Jeanne spent winters in Singer Island, Florida where they enjoyed the company of close friends. Relatives and friends are invited to visit with Jeanne’s family from 5-7 pm on Tuesday, December 28th at Miles Funeral Home, 1158 Main St., Holden. A Mass of Christian Burial will be celebrated at 11am on Wednesday, December 29th at St. Mary’s Church, 114 Princeton St., Jefferson. In lieu of flowers, memorial contributions may be made in Jeanne’s name to St. Jude Children’s Research Hospital, 262 Danny Thomas Pl., Memphis, TN 38105 (www.stjude.org). To share a memory or offer a condolence, please visit the "Tribute Wall" on this page.

HOLDEN- Jeanne M. (Lortie) O&#8217;Hara passed away peacefully on Saturday, December 25, 2021, in the loving care of her family and the compassionate staff at Dodge Park Rest Home and Notre Dame Hospice after a lengthy battle with Alzheimer's.... View Obituary & Service Information

The family of Jeanne M. (Lortie) O'Hara created this Life Tributes page to make it easy to share your memories.