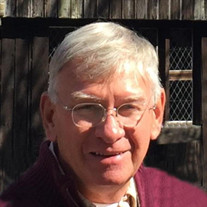 HOLDEN - Jeffrey W. Kemp, 72, died on April 15th. He passed peacefully with his wife Sue and daughter Addie at his side in their home overlooking the Quinapoxet River. He was diagnosed with pancreatic cancer less than three weeks prior. Jeff was born in Worcester, MA on April 13, 1949 to Richard S. Kemp and Marie S. Kemp. Soon after, the family moved to Princeton, MA where Jeff played little league and made fast friendships at a school with a single classroom per grade. Family, friends and community in this small New England town helped forge Jeff’s values. Jeff graduated from Wachusett Regional High School in 1967 and attended Quinsigamond Community College before being drafted into the United States Marine Corps in 1969. He served his country with the 1st Co, 3rd Battalion, 3rd Marine Div. in Vietnam until his honorable discharge from service. Jeff then managed the family ski shop before beginning his career as manager of Surfside Pools / Sport Loft Ski Shop in West Boylston, MA. Jeff married his longtime friend and love of his life Sue Scott in 1985. They settled in Holden and together raised their daughter Addie, spending the summer months in Wellfleet. Jeff, an avid skier, was on the slopes several times a week until a month ago. He had a passion for motorcycles and experimental aircraft, from hang gliders in the seventies to motor driven ultralight aircraft in later years. He developed many lasting friendships through these endeavors. He and Sue were members of the Vintage Vagabonds Hiking Club and spent many hours hiking with their dogs. After his 2015 retirement Jeff and Sue enjoyed travelling through Europe by car and riverboat. Jeff leaves his loving wife, their daughter, and her partner, Becca Crane of Los Angeles, CA. He will be lovingly missed by his brothers Richard S. Kemp Jr. of Basalt, CO and Brian F. Kemp and his wife Ruth of Venice, FL formerly of Upton, MA. Jeff was predeceased by his parents. As part of a large family, he leaves many cousins, nephews and nieces. Following his wishes, there will be no immediate services. There will be a celebration of his life at a later date for family and friends. In lieu of flowers, gifts in memory of Jeff may be made to UMass Medical School in support of pancreatic cancer research. Gifts can be made online at www.umassmed.edu/give or mailed to: Office of Advancement, UMass Medical School 333 South Street Shrewsbury, MA 01545 Checks should be made out to “UMass Medical School Foundation – pancreatic cancer research” and should note that the gift is in memory of Jeff Kemp. To share a memory or to offer a condolence please visit the "Tribute Wall' on this page.

HOLDEN - Jeffrey W. Kemp, 72, died on April 15th. He passed peacefully with his wife Sue and daughter Addie at his side in their home overlooking the Quinapoxet River. He was diagnosed with pancreatic cancer less than three weeks prior. Jeff... View Obituary & Service Information

The family of Jeffrey W. Kemp created this Life Tributes page to make it easy to share your memories.