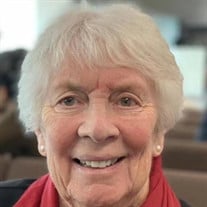 Northborough – Joan B. (Anderson) Hicks, 84, died peacefully on Wednesday May 18, 2022 at St. Vincent Hospital, Worcester, Massachusetts. She was born in Bay City, Michigan, the daughter of the late Charles and Dorothy (DeWaters) Anderson and grew up in Jackson, Michigan. Joan graduated from East Jackson High School. She later worked as a bookkeeper for Ganton's Countryside Care Center in Jackson, Michigan and then in many regions for the Beverly Corporation. She approached her work and life with enthusiasm and positivity - embracing challenges and persevering with faith and joy. Her work led her to relocate to several states including Michigan, New Hampshire, Kansas, Connecticut, Virginia, and Massachusetts. Joan was an accomplished driver, and proud to have driven to all of the states in the lower 48. Her love of travel extended to many adventures with friends, family and grandchildren. A favorite memory was riding her bike on I-94 in Michigan before it was open to cars. She also enjoyed exploring new talents and finding ways to give to those around her, from sewing highschool band uniforms with her cousin Mary to discovering a hidden talent for painting in retirement. Her greatest joy was spending time with her grandchildren and great grandchild, sharing favorite activities including movies, music, art, games, popcorn, and especially ice cream. Dessert was first for them. Joan will be lovingly missed and remembered by her son, Scott Hicks and his wife, Cynthia; her daughter, Kathi Wilhelm; her brothers, Chester Anderson and his wife, Mary; and Barry Searing and his wife, Rita; her grandchildren, Karl, Tiffany and Jason; and her great grandson, Camden. She also leaves many dear friends in her church community, to which she was actively devoted for over 60 years. Joan was predeceased by her daughter, Carrie Ellen Hicks and her brother Larry Anderson. Joan’s favorite word was JOY and her parting word was "enjoy!" rather than goodbye. Memorial contributions may be made to the American Heart Association, P.O. Box 840692, Dallas, TX 75284-0692 or at https://tinyurl.com/JoanBeverly. Arrangements are under the care of Miles Funeral Home, 1158 Main Street, Holden, MA.

The family of Joan B. Hicks created this Life Tributes page to make it easy to share your memories.

Send flowers to the Hicks family.