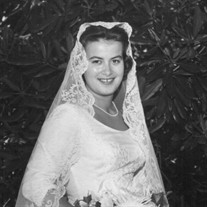 COTUIT/HOLDEN - Joan Marie Pendleton Brunzell passed peacefully on September 16, 2020 at St. Mary’s Healthcare of Worcester MA after a long illness. She was 83. She is survived by her husband of 60 years, Robert “Bob” Brunzell. They resided in Cotuit, MA for the past 23 years and raised their family in Holden, MA. She is also survived by her daughter, Andrea Gilbert and husband Ragan of Bronson, FL and son Michael Brunzell and his wife Barbara, and their children Abbey, Joel, and Duncan of West Bolyston, MA. Joan was preceded in death by her parents Wayne Pendleton and Julia (Arsenault) Pendleton and her beloved brother, Wayne Pendleton Jr. Joan was born June 20, 1937 in Worcester, MA and grew up on the Shrewsbury side of Lake Quinsigamond. She graduated from Ascension Central Catholic High School in Worcester. She worked early on as a telephone operator, a job of which she had many stories. She met Bob on a blind date, they married soon after, and were fortunate enough to have recently celebrated 60 years of marriage and life together. Joan was an excellent cook and a proud homemaker. Up until recently, she continued to plan her days around what she was going to cook from scratch. If you did her a kindness, you would find yourself in receipt of a homemade banana bread. During the Christmas season she crafted pickled raw herring, a traditional Swedish dish called Sill, that was both anticipated and avoided by family and friends. A full Swedish Christmas Eve dinner was also a family favorite. Joan volunteered for Falmouth Hospital in the cardiac rehab program and as a baby cuddler, a job she was uniquely qualified for. She enjoyed knitting hats for the hospital's newborns and for the homeless shelter in Hyannis. Due to current conditions the family will celebrate her life at a private gathering. In lieu of flowers or gifts please consider performing an act of kindness or a donation in her name to the Crohn's & Colitis Foundation. Funeral arrangements are under the care of Miles Funeral Home, 1158 Main St., Holden. To share a memory or to offer an online condolence, please visit the "Tribute Wall" on this page.

COTUIT/HOLDEN - Joan Marie Pendleton Brunzell passed peacefully on September 16, 2020 at St. Mary&#8217;s Healthcare of Worcester MA after a long illness. She was 83. She is survived by her husband of 60 years, Robert &#8220;Bob&#8221; Brunzell.... View Obituary & Service Information

The family of Joan Marie Pendleton Brunzell created this Life Tributes page to make it easy to share your memories.