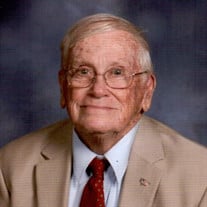 HOLDEN - John F. Connolly, Jr., 94, passed away peacefully at home surrounded by his loving family on Friday, December 31, 2021. John was born in Waltham, Massachusetts, on August 29, 1927. He was the son of John F. Connolly Sr. and Elizabeth P. (Coughlin) Connolly. John married Winifred M. Paddy on March 31, 1951, in King’s Lynn, England. They have been married for over 70 years and have lived in Holden since 1970. John is survived by his beloved wife, Winifred Connolly; his children; Vanessa E. Fisher of Rocklin, CA, Averil A. Capers and her partner, Dick Toomey of Holden, Dr. Corvin J. Connolly and his wife, Sallie of Salem, CT, and Jennifer M. Ritchea and her husband, Kim of Lovell, ME; his sister, Doris A. Daigle of Greensburg, PA; his five grandchildren, Melanie Manavi, Anthony Capers, Emily Bergman, Kevin Fisher, and Hannah Nguyen; three great-grandchildren; and many nieces, nephews, and cousins. He was predeceased by his son-in-law, Glenn Fisher. John will be dearly missed by all who knew and loved him. John graduated from Waltham High School and had a distinguished career in the U.S. Air Force, serving on the frontlines of the Cold War. He received a special commendation for his contributions as an air traffic controller during the Berlin Airlift, 1948-1949. John had numerous Air Force radar assignments in the United States and Europe, and after 24 years of dedicated service, John retired as a Senior Master Sergeant in 1970. He had a successful second career as a regional service manager for Tappan and Litton Industries before retiring in 1992. John was an active member of St. Mary’s Church in Holden and a proud member of the Knights of Columbus. John’s many passions included his family, the outdoors, reading, and New England sports. He enjoyed traveling to Wilde Willow, Lovell, Greensburg, Hampton Beach, Florida, Colorado Springs, Hawaii, and Europe with family. John enjoyed establishing life-long friendships. The family of John Connolly wishes to sincerely thank the nurses and doctors at St. Elizabeth’s Medical Center, UMass Memorial Medical Center ER, and Salmon Hospice. Relatives and friends are invited to attend calling hours from 4 to 7 p.m. on Tuesday, January 4th, in the Miles Funeral Home, 1158 Main Street, Holden. John’s funeral services will be held on Wednesday, January 5th, with a Mass of Christian Burial at 10 a.m. in St. Mary’s Church, 114 Princeton Road, Jefferson. Burial will follow at St. Mary’s Cemetery. To share a memory or offer an online condolence, please visit our "Tribute Wall" on this page.

HOLDEN - John F. Connolly, Jr., 94, passed away peacefully at home surrounded by his loving family on Friday, December 31, 2021. John was born in Waltham, Massachusetts, on August 29, 1927. He was the son of John F. Connolly Sr. and Elizabeth... View Obituary & Service Information

The family of John F. Connolly, Jr. created this Life Tributes page to make it easy to share your memories.

Send flowers to the Connolly, family.