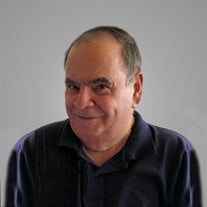 WEST BOYLSTON – John B. DiPietro, Sr., 78, husband of the late Carol Ann (Smithling) DiPietro, passed away suddenly on Tuesday, January 5, 2021, at UMass Memorial Medical Center. Born in Worcester and raised in Lancaster, he was a son of John and Anna (Caruso) DiPietro. John was a graduate of Notre Dame Preparatory School in Fitchburg and proudly served his country with the United States Air Force and served in Vietnam. John and Carol were married in 1968 and settled in West Boylston where together they raised their three children. He enjoyed a long career as a crane operator with the R E Chapman Company in West Boylston and was a member of the International Union of Operating Engineers Local 4 for over 20 years. John was active in his community and a member of the West Boylston Board of Selectmen for two terms. He also served on the Board of Health, the Zoning Commission, and the Water Commission. John had also been a member of Our Lady of Good Counsel Church. In his spare time, he could often be found relaxing while watching a favorite Western movie. He leaves his two sons, John B. DiPietro, Jr. and his significant other, Jean Lange of Orlando, FL and Michael E. DiPietro and his wife, Kristen of Lancaster; his daughter, Diana M. West and her husband, Paul of Worcester; a brother, Brian D. DiPietro and his wife, Cheryl of Lancaster; eight grandchildren, Matthew, John, Anthony, Brianna, Steven, Paul, Ryan, and Owen; four great-grandchildren, Maria, Carolynn, Riley and Brayden; and many nieces and nephews. In addition to his parents, he was predeceased by his wife of 48 years, Carol Ann in 2014. There will be a private graveside service for immediate family on Thursday, January 14, 2021, at Mt. Vernon Cemetery, West Boylston. In lieu of flowers, memorial donations may be made to the YWCA of Central MA, 1 Salem Sq., Worcester, MA 01608. Arrangements are under the care of the Miles-Sterling Funeral & Tribute Center, 100 Worcester Road, Sterling. To share a memory or to offer an online condolence, please visit the "Tribute Wall" on this page.

WEST BOYLSTON &#8211; John B. DiPietro, Sr., 78, husband of the late Carol Ann (Smithling) DiPietro, passed away suddenly on Tuesday, January 5, 2021, at UMass Memorial Medical Center. Born in Worcester and raised in Lancaster, he was a son... View Obituary & Service Information

The family of John B. DiPietro, Sr. created this Life Tributes page to make it easy to share your memories.