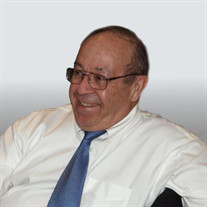 WORCESTER - John N. Gabriel, 78, of Worcester passed away following an illness on Sunday, November 21, 2021 in St. Vincent Hospital. John was born in Lawrence, MA, graduated from The Manlius School in Manlius, NY and earned his BA in Business at Norwich University, in Northfield, VT, where he was also a member of the ROTC. Following college, he was commissioned as a Second Lieutenant in the US Army, and served in Korea from 1966 through 1968. He was discharged from active duty as a First Lieutenant, and retired as a Captain from the Army Reserve. He was the son of Charles “Chick” Gabriel and Minnera (Hajjar) Gabriel. During college, he met and courted the late Martha J. Conway, of Langhorne, PA. They married in 1968 and stayed together happily until her death in 2020. John is survived by his son Charles "Chuck" Gabriel and daughter-in-law, Lauren Brandt, of Cambridge, MA, and leaves behind countless cousins and friends. Following his active service, John worked as an insurance underwriter for Travelers Insurance for 25 years, and then at The Hanover Insurance Group for another 20 years until his retirement in 2018. Throughout his life, John was an avid woodworker and handyman, building furniture, doing home renovations, and taking part in community projects such as building a playground in Merrimack, NH. He was also active in the Worcester Pistol & Rifle Club, and taught firearm safety courses there for many years. Wherever he went, John was known for his friendly demeanor and upbeat attitude. He lived by the words “There’s no time for that ‘glass-half-empty’ stuff. Don’t wait around to have fun,” and was truly a friend to everyone he met. Family and friends are invited to join the Gabriel family for visiting hours from 3:00 to 5:00 PM on Sunday November 28, 2021 in the Miles Funeral Home, 1158 Main Street, Holden. A family burial will take place on Monday, November 29 in United Lebanese Cemetery, 50 Corbett Street, Lawrence, MA. In lieu of flowers, contributions may be made in John’s name to Disabled American Veterans Department of Massachusetts, State House Room 546, Boston MA 02133 or the Dana Farber Cancer Institute, P.O. Box 849168, Boston, MA 02284. Arrangements are under the direction of Philip G. Haddad, Jr., Miles Funeral Home, 1158 Main Street, Holden. www.milesfuneralhome.com

WORCESTER - John N. Gabriel, 78, of Worcester passed away following an illness on Sunday, November 21, 2021 in St. Vincent Hospital. John was born in Lawrence, MA, graduated from The Manlius School in Manlius, NY and earned his BA in Business... View Obituary & Service Information

The family of John N. Gabriel created this Life Tributes page to make it easy to share your memories.

Send flowers to the Gabriel family.