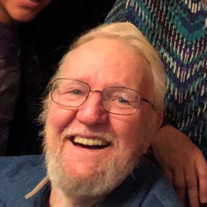 HOLDEN / AUBURN – John R. Hanebury, 83, died peacefully on the morning of Sunday, November 1, 2020 at Life Care Center of Auburn. He was born in Truro, Nova Scotia, the son of Ralph E. and Doris K. (Henderson) Hanebury. John grew up in Worcester, and graduated from Worcester Boys Trade School with the class of 1955. He met the love of his life, Claire E. (Gould) at the age of nine and had been with her ever since. John and Claire married and settled in Holden where they lived for over 50 years, before moving to Auburn nine years ago. John worked as a sheet metal worker and a roofer for George A. Barnard Co. in Worcester, where he dedicated over 40 years of service. John had a lifelong passion for model trains. His H.O. and G scale train sets that he erected were nothing short of impressive. John even had a train that ran through his garden. Above all he was a loving and devoted husband, father and grandfather and he will be dearly missed. John is survived by his beloved wife of 63 years, Claire E. (Gould) Hanebury; his daughters, Claire Louise Boschetto and her husband, Andrew of Auburn, Wanda Lynn Hanebury and her wife, Sharon of Auburn, and Theresa Marie Hanebury and her wife, Nancy Goodearl of Houston, TX; and his grandchildren, Jonathan Boschetto, Nicholas Boschetto, Concetta Boschetto, Adrienne Boschetto, Dominick Boschetto, Angela Hanebury Goodearl and John Hanebury Goodearl. A graveside service honoring and celebrating John’s life will be held at 10:00am on Monday November 9 at Worcester County Memorial Park, 217 Richard’s Ave., Paxton. In lieu of flowers donations may be made to the American Heart Association, P.O. Box 3049, Syracuse, NY 13220-3049 or to St. Jude’s Children Hospital, 501 St. Jude Place, Memphis, TN 38105. Arrangements are under the care of Miles Funeral Home, 1158 Main St., Holden. To share a memory or to offer an online condolence, please visit the "Tribute Wall" on this page.

The family of John R. Hanebury created this Life Tributes page to make it easy to share your memories.

Send flowers to the Hanebury family.