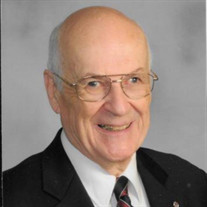 WORCESTER - John (Jack) Francis McLaughlin, Jr. died on December 31st, 2021, in Northborough after a long battle with cancer. He is survived by his wife of 65 years, Mary Lou (Thomas) McLaughlin, his children and son-in-law; Sharon McLaughlin of Worcester, Susan Cantwell, and her husband Michael of Allen, TX, Kevin McLaughlin of Saunderstown, RI, and Eileen McLaughlin of Worcester. He also leaves four granddaughters and a grandson-in-law, Megan Khaddar and her husband Alex of Boston, Paige McLaughlin of Narragansett, RI and Sarah Cantwell of Richardson, TX and Emily Cantwell of Austin, TX, his sisters, Judith Ryan of Worcester, and Dorothy Salmon and her husband Daniel of Worcester, many nieces, nephews, cousins, and friends. John was proud of and thrilled to welcome his first great-grandchild Harry Khaddar in August of 2021. He was born in 1933 in Worcester to John F. and Dorothy (O’Toole) McLaughlin. He attended St. John’s High School and Holy Cross College - class of 1956. He was a US Army veteran. After his military service, he returned to Worcester and trained to be a teacher. He was a 5th-grade teacher in the Shirley schools and the Greendale Elementary School in Worcester. He earned a Master of Education degree from Worcester State Teacher’s College. He completed postgraduate studies at UMass Amherst in Speech Pathology. John joined the faculty of Worcester State College in 1968, where he helped establish the Communication Disorders Department. After nearly 30 years of teaching, he retired from Worcester State and was granted the title of Professor Emeritus. John was a member of the Bishop Neary Council of the Knights of Columbus, and past Grand Knight of that council. He was a Faithful Navigator of the John Cardinal Wright Assembly. He was a member of the Greendale Men’s Club and the Disabled Veterans of America. An active member of his church, John served as a Eucharistic minister at St. George’s Parish and in the Chaplin’s office of UMass Memorial. He and his wife volunteered with the Worcester FoodBank. They also enjoyed traveling, especially cruising. The family wishes to thank the doctors, nurses, and staff at Beaumont Nursing Home in Northborough for their care and compassion during John’s final weeks. Relatives and friends are invited to attend calling hours from 4 to 7 p.m. on Friday, January 7th in the Miles Funeral Home, 1158 Main Street, Holden. Funeral services for Jack will be held on Saturday, January 8th with an 11 a.m. Mass of Christian Burial in St. George’s Church, 38 Brattle Street, Worcester. Burial will follow at Worcester County Memorial Park in Paxton. In lieu of flowers, memorial contributions may be made to the Worcester State Foundation, 486 Chandler Street, Worcester, MA 01602, with a note in the memo field: John “Jack” McLaughlin, Jr. Memorial Scholarship. To share a memory or offer an online condolence, please visit our "Tribute Wall" on this page.

WORCESTER - John (Jack) Francis McLaughlin, Jr. died on December 31st, 2021, in Northborough after a long battle with cancer. He is survived by his wife of 65 years, Mary Lou (Thomas) McLaughlin, his children and son-in-law; Sharon McLaughlin... View Obituary & Service Information

The family of John "Jack" F. McLaughlin, Jr. created this Life Tributes page to make it easy to share your memories.

Send flowers to the McLaughlin, family.