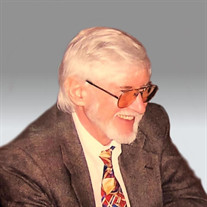 LANCASTER - Jon B. Elwell, son of John B. and Kathleen (Healy) Elwell, passed away peacefully at home in Lancaster on Sunday, July 11, 2021. He was born at Bennington Hospital in Bennington, VT on January 8, 1942. He attended elementary school in Bennington and high school in Arlington, VT where he played soccer and was the manager of the basketball team. He was very active in the town of Arlington Drum and Bugle Corp. Upon graduation in 1960, Jon joined the Navy and was bugle soloist at boot camp graduation. He was sent to sonar school and was assigned to the USS Bainbridge, the Navy’s first nuclear frigate which was later renamed a light cruiser. Jon served two Mediterranean cruises and was held in abeyance during the Cuban missile crisis. He left the Navy in August 1964 and attended 2 year technical school at Wentworth Technical Institute, graduating in 1966. He then attended the University of Vermont from which he graduated with a Bachelor of Science Degree in Electrical Engineering. While in the Navy, he became interested in underwater acoustics and he subsequently went to work at the Naval Undersea Systems Center in Newport, RI. He participated in several undersea research and development exercises and was ultimately instrumental in the organization of applied technology from which evolved the very first application of what we now call video teleconferencing. In 2007, he married Judith B. Carpenter and they moved to Lancaster in 2010 where he continued his passion for high end audio. During the first energy crisis, Jon took up motorcycling. His first bike was a 400 cc Honda which ultimately grew into a 1900 cc Harley Davidson. Over the years, he rode nearly 350,000 miles including participating in several well-known rallies and trips to Oregon, Sturgis, SD and Key West, FL. He leaves behind his beloved wife, Judith Elwell and her children, Michelle Grambley and her daughter Nichole Davis, William Carpenter and his wife Angela and daughter Nora, and Michael Egan and daughter Emma all of whom adopted him into the family with great affection. He also leaves a niece, Kelli Michaels. Relatives and friends are invited to visit with his family from 2:00 pm to 4:00 pm on Monday, July 19th, at Miles-Sterling Funeral and Tribute Center, 100 Worcester Rd., Sterling. A memorial service will follow at 4:00 pm. Burial will be held privately at a later date at the Veterans’ Memorial Cemetery in Exeter, RI. Donations in lieu of flowers can be sent to the V Foundation (Victory over Cancer) at v.org. Funeral arrangements are under the care of Miles-Sterling Funeral and Tribute Center.

LANCASTER - Jon B. Elwell, son of John B. and Kathleen (Healy) Elwell, passed away peacefully at home in Lancaster on Sunday, July 11, 2021. He was born at Bennington Hospital in Bennington, VT on January 8, 1942. He attended elementary school... View Obituary & Service Information

The family of Jon B. Elwell created this Life Tributes page to make it easy to share your memories.

Send flowers to the Elwell family.