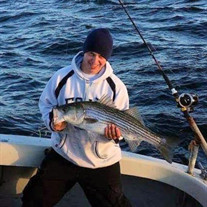 WORCESTER – Joshua S. Ferguson, age 29, went home to be with the Lord September 3, 2020. Born in Worcester, the son of Richard D. Ferguson and Deborah J. McCarthy. Josh grew up in Holden and was a 2009 graduate of the Mount Wachusett Gateway to College Program. He worked hard renovating & painting doing Property maintenance for many years. During his younger years, Josh played baseball & football for Wachusett District. He always looked forward to his annual trips to King Richard’s Fair, trips to Hampton Beach & Canobie Lake Park. Bowling on Sundays with his family was a favorite. He was a member of the Civil Air Patrol, where he was able to fulfill his passion for flying. He accomplished one of his biggest dreams since Kindergarten, to travel to Australia & New Zealand with Adventures Down Under. Josh will be remembered for being adventurous, always exploring and looking for his next fishing spot. Growing up he was always happiest making forts, exploring trails, and often making his own trails in the woods. Josh will be sadly missed by his biggest cheerleader, his mom, Deborah J. McCarthy of Paxton, along with his loving family, father Richard D. Ferguson and his wife, Elisa step-mother of Worcester; his brother, Christopher Ferguson and his wife, Samantha of Holden; step-sister Chantel Roberge and her husband Nate Kadow of PA; his grandmothers, Judith McCarthy of Marlboro, Alice Twohig of Shrewsbury. Josh’s practical jokes will never be forgotten among his aunts, uncles, cousins, nieces and nephews. Josh was predeceased by his step-dad “Mac” Paul E. McCarthy and his step-brother, Jamieson Roberge. His grandfathers, “Big Mac”, Paul F. McCarthy and Clarence Twohig. Due to the Covid pandemic, there will be a graveside service honoring Josh’s life at 10:00 am, September 15th, at Notre Dame Cemetery in Worcester. In lieu of flowers, memorial donations may be made to Holden Chapel Grief Support, 279 Reservoir Street Holden, MA 01520.

WORCESTER &#8211; Joshua S. Ferguson, age 29, went home to be with the Lord September 3, 2020. Born in Worcester, the son of Richard D. Ferguson and Deborah J. McCarthy. Josh grew up in Holden and was a 2009 graduate of the Mount Wachusett... View Obituary & Service Information

The family of Joshua S. Ferguson created this Life Tributes page to make it easy to share your memories.