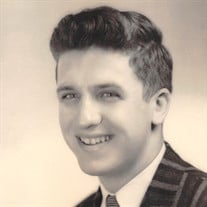 PAXTON – Kevin J. Hubbard, 79, beloved husband of Elizabeth (McDonough) Hubbard, passed away peacefully in the comfort of his home on Saturday, September 12, 2020 surrounded by his family. Born and raised in Melrose, he was a son of the late Earl J. and Mary (O’Neill) Hubbard. After graduating from Melrose High School in 1959, he enlisted in the United States Navy and proudly served his country for the next eight years. He was awarded the National Defense Service Medal and graduated from the Cryptographic Naval School in 1964. He was an honorary member of Helicopter Sea Combat Squadron FIVE (HSC-5) and the Royal Order of Seagoing Whirly-Birdmen. Upon his return from the service, Kevin joined the Sanders Company in Nashua, NH in the Printed Circuit Design Department. After a myriad of other electronic design positions and consulting opportunities, he retired from FLIR Systems in 2002 and the following year Kevin and Elizabeth moved to Paxton. During his retirement years he was a driver for Fisher Auto in Holden and Safeway Transportation in Worcester. Driving to Kevin was never a job, but a joy. He was an active member of the community and served on the Elderly Housing Committee. He was a member of the Paxton Bowling League for several years. In his spare time, he could often be found listening to 50’s music, doing crossword puzzles or taking a leisurely scenic drive. He will be lovingly missed and remembered by his wife of 60 years, Elizabeth; his three daughters, Jeanne Hankerson and her husband, Dennis of Scottsdale, AZ, Michele O’Brien and her husband, James, (with whom they lived) and Theresa Hernon and her husband, Matthew of Methuen, MA; his brother, Terence Hubbard and his wife, Monica of Hendersonville N. Carolina; his sister, Patricia Wonsar of Campobello, S. Carolina; five grandchildren; Jacqueline Higgins-Dailey and her husband, Ken, Kevin Higgins and his wife, Jamie, Shane O’Brien, Colin O’Brien and Brooke Hernon; and his close friends, Joe Reynolds, Ralph Martone, Jeff Smith and Doug MacDonald. In addition to his parents, Kevin was predeceased by his brother Richard Hubbard. A Mass of Christian Burial will be celebrated at 10:00am on Monday, September 21 in St. Columba Church, 10 Richards Avenue, Paxton, MA. Appropriate Covid-19 protocol will be observed including the use of face masks and social distancing. Kevin will be laid to rest in the Massachusetts Veterans Memorial Cemetery, 111 Glenallen Road, Winchendon, MA. In lieu of flowers, memorial donations may be made to Veteransinc.org. Arrangements are under the care of Miles Funeral Home, 1158 Main Street, Holden, MA. To share a memory or offer a condolence please visit "The Tribute Wall."

PAXTON &#8211; Kevin J. Hubbard, 79, beloved husband of Elizabeth (McDonough) Hubbard, passed away peacefully in the comfort of his home on Saturday, September 12, 2020 surrounded by his family. Born and raised in Melrose, he was a son of the... View Obituary & Service Information

The family of Kevin J. Hubbard created this Life Tributes page to make it easy to share your memories.

Send flowers to the Hubbard family.