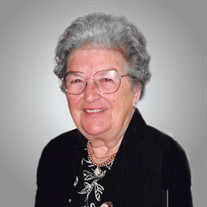 ** Due to the inclement weather, the funeral has been rescheduled, please see below*** HOLDEN/WEST BOYLSTON - Laura Gilda (Occhialini) Harrington died on Tuesday, January 26, 2021. She was born March 2, 1920 in Holden, and was the only child of Louis and Esther (Pandolfi) Occhialini of Jefferson. Laura graduated from Holden High School in 1938 and Becker College in 1939. Upon graduation, she worked for the David Clark Co. of Worcester, which pioneered the development of protective equipment for air and space crew members. She later worked at Reed Rolled Thread Die Co. in Holden for 27 years, retiring in 1982. Laura was married to Daniel J. Harrington for 43 years who predeceased her in 1985. They had a son, Dennis J. Harrington who predeceased Laura in 2013, and is survived by her daughter, Elaine Drawbridge of Holden. Laura was a busy “hands on" Nonna with many grandchildren, including Jed Harrington of Bonita Springs, FL, Yaran Drawbridge of Johnston, RI, Dara Neville of Holden, Teagan Drawbridge-Quealy of Scituate, Nathan Drawbridge of Barre and Tanner Drawbridge of Worcester. Laura was a Bisnonna to 4 great-grandchildren. After the death of her husband Dan in 1985, Laura developed a passion for traveling and participated in many tours throughout the United States and internationally. She was a member of St. Mary’s Church in Jefferson, the Holden Senior Center and VFW Auxiliary. She loved ballroom dancing. She was a regular member of a senior bowling league at Town and Country Bowling until a fall at the annual bowling banquet resulted in a complete shoulder replacement at age 82. Not to be relegated to inactivity, she joined the Worcester JCC and was a constant participant in their water fitness program. One word that comes to mind when thinking about Laura, it is resilient, even that resiliency could not defeat the passing 100 years or COVID-19. The family would like to thank the caring staff at Oakdale Rehabilitation and Skilled Nursing Center in West Boylston for the excellent care Laura received during the last years of her long life. A funeral service honoring her life will be held at 10:30 am on Thursday, February 4, at Miles Funeral Home, 1158 Main St., Holden. Her funeral will be live streamed and available for viewing at this link: https://client.tribucast.com/tcid/90251927. Spring burial will be held privately in St. Mary's Cemetery in Holden.

** Due to the inclement weather, the funeral has been rescheduled, please see below*** HOLDEN/WEST BOYLSTON - Laura Gilda (Occhialini) Harrington died on Tuesday, January 26, 2021. She was born March 2, 1920 in Holden, and was the only child... View Obituary & Service Information

The family of Laura Gilda (Occhialini) Harrington created this Life Tributes page to make it easy to share your memories.

** Due to the inclement weather, the funeral has been rescheduled,...

Send flowers to the Harrington family.