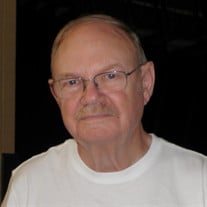 PRINCETON – Lester A. Lier, Jr., age 82, passed away peacefully on Tuesday, September 14, 2021 at UMass Memorial Health Alliance - Clinton Hospital. Born in Worcester, he was the son of Lester A. and Olive (Hemenway) Lier, Sr. Lester graduated from South High School in Worcester, where he first met Nancy, and went on to take classes at Worcester Junior College and Worcester Polytechnic Institute. Lester honorably served his country in the United States Army. He worked as a Quality Control Engineer for many companies including GTE and Bose. It was at Riley Stoker Corporation where he was reacquainted with Nancy, and they soon fell in love and were married. They started their life and family in Holden, moved to Paxton before settling in Princeton for the last 42 years. Whether it was hiking, hunting or archery, Lester truly enjoyed the outdoors and was a member of the North Worcester Fox and Coon Club in Holden and a Life Time Member of The Eight Point Sportsmen's Club in Sterling. He spent many years golfing and coaching his children's sports teams. For both work and pleasure, Lester relished traveling with his wife. She fondly remembers their trips to Hawaii and Napa Valley, CA. He will be remembered as a happy man who above all, loved his grandchildren. Lester treasured teaching them all of his outdoor hobbies, including archery, shooting and his hiking trails. He leaves his loving wife of 59 years, Nancy A. (Sauer) Lier; two daughters, Christine Provencher of Jefferson, Jennifer Cahill and her husband, Danny of Jefferson; one son, Jeffrey Lier and his wife, Karen of Westminster; one daughter in law Susan Lier of Auburn; eight grandchildren, Eric, Evan, Andrew, Kimberly, Colin, Jillian, Everett and Robert; and many nieces and nephews. He is predeceased by his son, Stephen Lier; and two sisters, Elvena Sears and Shirley Connelly. Relatives and friends are invited to a Graveside Service honoring his life at 11 a.m. on Friday, September 24th, 2021, at Worcester County Memorial Park, 217 Richards Ave., Paxton. In lieu of flowers, memorial donations in his name may be made to the Parkinson Foundation, 200 SE 1st Street, Suite 800, Miami, FL 33131, or online at https://secure3.convio.net/prkorg/site/Donation2?10153.donation=form1&df_id=10153&mfc_pref=T Funeral arrangements are under the care of Miles Funeral Home of Holden.

The family of Lester A. Lier, Jr. created this Life Tributes page to make it easy to share your memories.