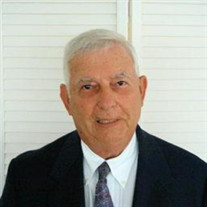 Lester's graveside funeral service will be livestreamed at 11:00 am, Friday June 18th and will be available for viewing at this link: https://client.tribucast.com/tcid/1229651926 WORCESTER – Lester Sadowsky, age 96 a resident of Palm Beach, FL for the past 30 years, died on Tuesday, June 15 at UMASS Memorial Medical Center – University Campus. Born on March 22, 1925, in Worcester, MA, Lester grew up in the Vernon Hill section in Worcester with some friends that he kept for ninety years. He went into the US Army for World War II and was a radio gunner in Okinawa. The greatest generation has lost another member. Upon his return from the war, he went into the business that his father, Abe, started – Atlas Distributing in Worcester, MA (now in Auburn). He was the son of Abraham and Sarah (Binomovitz) Sadowsky. He loved his family and friends and they loved him back. He leaves his wife of 72 years, Joan (Ziegler) Sadowsky; his children, John Sadowsky and his wife, Birgit of Charmey, Switzerland, Karen Sadowsky wife of Richard Kaufman of Sturbridge, MA, Laura Jane Sadowsky wife of Guy Bouchard of Gaspe, Quebec, Canada, and Ken Sadowsky of Miami Beach, FL; one brother, Harold, of Naples of FL; and three grandchildren. He was pre-deceased by his brothers William of Longmeadow, MA and Dr. Norman of Brookline, MA and his sisters, Ida (Teddy) Josephs, and Rose Segal both of Palm Beach, FL. His athletic abilities were recognized early – as a pitcher for Classical High in Worcester. He went to the University of Illinois on a baseball scholarship and was drafted by the Philadelphia Athletics. He was also called to serve in the US Army and that duty took precedence. He was a natural athlete; being a self-taught racquet sport player – tennis, racquetball and squash. He also played handball. He was a champion player in all of those sports at the Downtown YMCA in Worcester. Later, he was inducted into the Worcester Sports Hall of Fame. Professionally, he was the President of Atlas Distributing in Auburn, MA. He was philanthropically involved in the Chamber of Commerce in Worcester, Temple Emanuel, The Ecotarium, UMASS Memorial Medical Center, Assumption University and the United Way. He was an avid golfer and could be found at Mount Pleasant on weekends with Jack Wolfson and Bob Green. A graveside funeral service will be held at 11:00 AM on Friday, June 18th in B’Nai Brith Cemetery, 55 St. Johns Road, Worcester under the direction of Richard Perlman of Miles Funeral Home of Holden. Immediately following the interment service a Memorial Observance Reception will be held at 12 to 6PM at the Clubhouse of Salisbury West, 770 Salisbury Street, Worcester. Memorial contributions may be made online at www.Umassmed.edu/give or mailed to: Office of Advancement UMass Medical School, 333 South St. Shrewsbury, MA 01545. To share a memory or offer condolence please visit "The Tribute Wall."

Lester's graveside funeral service will be livestreamed at 11:00 am, Friday June 18th and will be available for viewing at this link: https://client.tribucast.com/tcid/1229651926 WORCESTER &#8211; Lester Sadowsky, age 96 a resident of Palm... View Obituary & Service Information

The family of Lester Sadowsky created this Life Tributes page to make it easy to share your memories.

Lester&#39;s graveside funeral service will be livestreamed at 11:00...

Send flowers to the Sadowsky family.