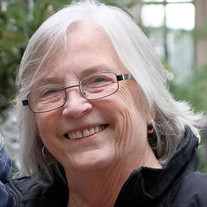 PAXTON - Linda Fay Chamberlayne, formerly of Worcester, passed away July 5th after a two-year struggle with cancer. She died feeling that she had been fortunate to enjoy a good life and to leave a good family, and she was the kind of person whose big heart made everyone around better for the knowing. Linda was born January 2, 1944 in Gouverneur, NY, to Fay Charles and Nora Amanda (Narrow) Bailey of Syracuse. She first met her father, a bomber pilot in the war, after his release from a POW camp in Germany in 1945 when she was age seventeen months. An only child, she grew up in Syracuse, graduated high school in 1961 and Cortland State College in 1966. She married Edward M. Riseman, now deceased, with whom she had two children. In the mid-seventies she married Donald W. Chamberlayne, with whom she spent her remaining years with her children in Worcester and, in retirement, in Paxton. In addition to her husband Don, she leaves her daughter, Sarah Fay Riseman and her husband, Lt. Cmdr Charles W. Taylor, USCG of Wallingford, PA; her son, Seth Edward Riseman and his wife, Christina Marie (Wright) Riseman, of Louisville, CO; and her grandchildren, Dae Orion Taylor, 16, and Kayla Fay Taylor, 12, of Wallingford, PA. After teaching elementary school in her early post-college years, she went back to work in the 1980s and rose to the position of production planner with Artel Communications Corp., formerly of Worcester, now of Hudson She retired in 2007. Besides spending time with her family, Linda’s greatest pleasures in life were genealogical research, reading English mysteries, making stained glass art objects, listening to music, and traveling the country by auto in retirement. She is now and will always be sorely missed. Her family was very fortunate to have her as wife, mom, and grandma. Her family expresses its sincere thanks and appreciation for the excellent service of the Dana Farber Cancer Center in Milford, especially Dr. Daniel Roberts and RN Christine Carr, and the nursing staff of VNA Care Network of Worcester. Relatives and friends are invited to visit with Linda’s family from 1 to 3 p.m. on Wednesday, July 14th in the Miles Funeral Home, 1158 Main Street, Holden. A private committal service will be held at the convenience of the family at Hope Cemetery in Worcester. In lieu of flowers, memorial contributions may be made to Dana-Farber Cancer Institute, 20 Prospect Street, Milford, MA 01757, or VNA Care Network, 120 Thomas Street, Worcester, MA 01608. To share a memory or offer an online condolence, please visit our "Tribute Wall"

PAXTON - Linda Fay Chamberlayne, formerly of Worcester, passed away July 5th after a two-year struggle with cancer. She died feeling that she had been fortunate to enjoy a good life and to leave a good family, and she was the kind of person... View Obituary & Service Information

The family of Linda Fay Chamberlayne created this Life Tributes page to make it easy to share your memories.

Send flowers to the Chamberlayne family.