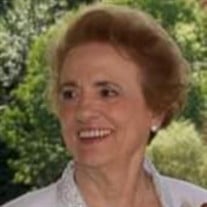 HOLDEN - Louise C. (Lacillade) Hugo, a longtime resident of Holden, passed away Thursday, May 26, 2022 at The Oasis at Dodge Park in Worcester, with her children by her side. She was 91 years old. She will be lovingly remembered and greatly missed by her son, Christopher C. Hugo of Holden; her daughter and son-in-law, Lisa L. Hugo and Joseph Levesque of Rutland; a niece, Andrea Morris of Hadley; cousins, extended family and a large circle of friends. Her husband of 45 years, Charles F. Hugo, predeceased her in 2005. Louise was born in Holden Hospital on February 18, 1931, to the late Walter and Valeria (Faucher) Lacillade, and was raised in Worcester. After graduating from North High School, she attended the University of Illinois but returned to Worcester to help her parents when her father lost his eyesight. She earned a Bachelor’s Degree from Anna Maria College in Paxton and became a middle school teacher in the Westborough schools. She later tutored special education students in the Wachusett school district. Louise loved the town of Holden, where she resided for nearly 60 years. She was always involved in a project, cause, activity or event. Her contributions to the community were many, including being president of the Holden Women’s Club, president of Rice School’s PTA, a Girl Scout troop leader, a member of the Holden Historical Society, and a founding member of the Holden Center Neighborhood Association. She was named the Holden Women’s Club “Person of the Year” in 2011, and together with her husband received Holden’s Good Neighbor Award in 2002. Louise was instrumental in efforts to save the former Holden Hospital, Rice School, the Butler House, Damon House and other historic preservation initiatives. Louise cherished her family and friends. The embodiment of kindness and generosity, she had a natural gift of lighting up any room she entered. Louise never met a stranger and could engage anyone in conversation! Her heart and home were open to all. She was a woman of grace and dignity who treated everyone she met with compassion and respect. She loved animals, taking in countless stray cats and dogs and supporting numerous animal welfare organizations. Although she wouldn’t fly, she enjoyed traveling and finding interesting new places to explore. Among her favorite spots was Goose Rocks Beach in Kennebunkport Maine, where she and Charlie vacationed for many years. She was in her element hosting annual gatherings of the lifelong friends that were invited to stay with them at “The Westerly.” Louise’s family would like to recognize the entire staff of The Oasis at Dodge Park for the love, concern and exceptional care they provided to her over the past five years. Calling hours will be held Wednesday, June 1 from 5-7pm at Miles Funeral Home in Holden. A funeral mass will take place Thursday, June 2 at 11am at St. Mary’s Church in Jefferson; burial will follow at Grove Cemetery in Holden. In lieu of flowers, the family requests that memorial contributions be made to the Charles Hugo Community Service Award, c/o Greater Worcester Community Foundation, 370 Main St. Suite 650, Worcester MA 01608; or The Oasis at Dodge Park (memo line “Employee Fund”), c/o The Oasis at Dodge Park, 102 Randolph Rd, Worcester MA 01606. Express condolences at milesfuneralhome.com

HOLDEN - Louise C. (Lacillade) Hugo, a longtime resident of Holden, passed away Thursday, May 26, 2022 at The Oasis at Dodge Park in Worcester, with her children by her side. She was 91 years old. She will be lovingly remembered and greatly... View Obituary & Service Information

The family of Louise C. Hugo created this Life Tributes page to make it easy to share your memories.

Send flowers to the Hugo family.