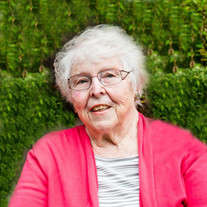 HOLDEN - Lucille A. (DesRochers) Dufault, 90, passed away in the peaceful surroundings of her home with her loving family by her side on Tuesday, December 15, 2020. Born and raised in Chicopee, Lucille was the daughter of Dr. Euclide C. and Elianne F. (DesLauriers) DesRochers and lived the last 63 years in Holden. Her beloved husband of 58 years, John P. Dufault, Ph.D., died in 2011. Lucille was a graduate of Cathedral High School and Our Lady of the Elms College, both in Springfield. She completed her Master's Degree in Education at Assumption College in Worcester in 1981. While attending college, Lucille met John on a blind date at an Assumption College function. A year after their graduation from college, Lucille and John were married in St Rose de Lima Church, in Chicopee on June 28, 1952. They lived in Athol and Worcester before building their dream home in Holden. Upon moving to Holden, Lucille and John registered at St. Mary’s Church in Jefferson where Lucille was a Eucharistic Minister. Lucille will be lovingly remembered and missed by, her five sons, Peter J.G. Dufault and his wife, Janet Glenn of Pepperell, Matthew J. Dufault and his wife, Kathleen of Holden, Andrew J. Dufault of Jersey City, New Jersey, Thomas J. Dufault and his wife Elizabeth Brennan of Jefferson and Michael J. Dufault and his wife, Noelle LeChevalier-Dufault of White Bear Lake, Minnesota; a brother, Dr. Robert A. DesRochers of Sarasota, Florida; 8 grandchildren, Olivia, David, Anne, Tricia, John, Dan and his wife, Meg, Catherine and Julia; and many nieces and nephews. Besides her husband, John, Lucille was predeceased by her daughter, Michelle “Mimi” Dufault, her son Mark J. Dufault, and a brother, Dr. Euclide C. DesRochers Jr. Lucille graduated college as a chemist but her love of reading and learning inspired her to return to school and work towards a career in education. At age 45 she returned to work for the Wachusett Regional School District and remained there for the next 25 years. Lucille taught for many years as a reading teacher at Holden Junior High and Mountview Middle School, and finished her career as a 5th grade teacher at Chaffins Elementary School, retiring in 2000. Lucille continued to fill in with the school district as an interim administrator after her retirement. Lucille's commitment to education and her students could only be rivaled by her commitment to family. She grew up spending summers at “The Camp” on Nine Mile Pond in Wilbraham where summer Sundays were spent with relatives swimming, fishing, cookouts, and card games into the evening - all were welcome and often there were over 20 relatives in attendance. She remembered the Camp fondly as her favorite place to be and even in her later years spent weeks there with her brother and sister-in-law. She enjoyed camping with her family throughout the years, traveling anywhere from Canada to Florida in her trailer. She spent two weeks with her family around the Fourth of July every year at her Cape house “Bogside” and after retirement traveled with John to Europe, the Panama Canal and took several cruises. She had a passion for gardening, house plants and flowers and spent many hours in her yard and her greenhouse. A funeral mass will be celebrated at St. Mary's Church in Jefferson at 10:30 am on Friday, September 17, 2021, with burial to follow at Grove Cemetery, 1520 Main St, Holden. In lieu of flowers, memorial contributions may be made to The Dufault Family Scholarship Fund, Assumption College, 500 Salisbury St., Worcester, MA 01609, or The Jimmy Fund, 10 Brookline Place West, 6th Floor, Brookline, MA 02445-7226 (jimmyfund.org). To share a memory or offer a condolence please visit "The Tribute Wall" on this page.

HOLDEN - Lucille A. (DesRochers) Dufault, 90, passed away in the peaceful surroundings of her home with her loving family by her side on Tuesday, December 15, 2020. Born and raised in Chicopee, Lucille was the daughter of Dr. Euclide C. and... View Obituary & Service Information

The family of Lucille A. (DesRochers) Dufault created this Life Tributes page to make it easy to share your memories.