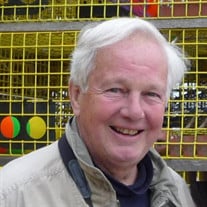 Malcolm's graveside funeral service may be viewed by clicking the following link: https://client.tribucast.com/tcid/6660992675 The architect and artist, Malcolm Montague Davis, died peacefully on June 1, 2021. He was a graduate of Harvard College and The Harvard Graduate School of Design. He began his architectural practice in Berlin, Yangon Myanmar, and Rome before returning to the United States to work for The Architects Collaborative and later opening his own practice in Boston. Malcolm brought his passion for architecture to the world of Fine Art. A talented and meticulous artist he used a unique hard edge style in his work. The infinite care and craftsmanship he put into his colorful abstract paintings earned him the nickname “Straight-Edge Davis.” His resume lists 34 exhibitions, dozens of solo and group shows, publications, gallery shows, and important collections which contain his work. Over the years, he has received multiple awards and accolades. He is represented by Beacon Gallery in Boston, Massachusetts. Interested and interesting described who he was. As an avid reader, great adventurer, and master storyteller. He used his ability to draw people together leading many hiking and canoeing trips around the country. Malcolm founded the lunch group ROMEO (Retired Old Men Eating Out) and remained very close to his Harvard classmates giving lectures and leading Harvard reunions. Traveling and especially spending time in Grenada, New Mexico, and in Friendship, Maine gave him great pleasure. In Friendship, he knew the lobstermen by name and greatly admired them for their mastery of their trade. Using the colors of Grenada, New Mexico, and Friendship, he incorporated what he saw into his paintings. His passion for railroads brought inspiration to his work. Davis’ Sierra Nevada Railroad Series is dedicated to his great grandfather, Samuel Skerry Montague, the Chief Engineer of the Central Pacific Railroad and responsible for building the western half of the Transcontinental Railroad. In the famous “Golden Spike” photo taken at Promontory Summit, Utah in 1869, “S.S.” Montague is pictured on the left shaking hands with Grenville M. Dodge, Chief Engineer for the Union Pacific. Two college summers surveying in Greenland influenced him. The consummate urbanite ecologist, Malcolm abandoned using a car in the city, choosing to walk to his many destinations. He leaves behind many friends, his beloved cats Tulip and Tallulah, and his best friend and life partner, Faith Rubin of Boston and Webster, MA. A true gentleman; the likes of which may not be seen again! A graveside funeral service will be held at 1:00PM on Tuesday, June 8th at B’Nai Brith Cemetery, 55 St. John’s Road, Worcester under the care of Richard Perlman of Miles Funeral Home of Holden. To share a memory or offer a condolence please visit "The Tribute Wall."

Malcolm's graveside funeral service may be viewed by clicking the following link: https://client.tribucast.com/tcid/6660992675 The architect and artist, Malcolm Montague Davis, died peacefully on June 1, 2021. He was a graduate of Harvard College... View Obituary & Service Information

The family of Malcolm Montague Davis created this Life Tributes page to make it easy to share your memories.

Malcolm&#39;s graveside funeral service may be viewed by clicking...

Send flowers to the Davis family.