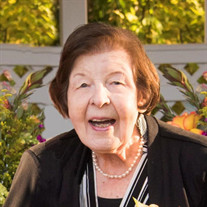 HOLDEN - Margaret “Peggy” A. (Scholar) Mirick, 93, passed away peacefully on Monday, May 17, 2021. She was born in Rome, New York, the daughter of Joseph D., Sr. and Kathryn (Daniels) Scholar and had lived in Holden since 1967. Her husband of 55 years, Albert H. Mirick II, passed away in 2007. She leaves her daughter, Kathy R. Doering (Mirick) and her husband, Daniel of Rutland; her grandchildren, Alexander, Marina and Samuel Kowaleski, Chase Mirick and Carly Hovagimian, four great grandchildren, and many nephews and nieces. She was predeceased by her son, Peter G. Mirick and her brother, Joseph Scholar, Jr. Peggy grew up in Kingston, New York, and later on graduated from Lesley College in Boston where she earned a degree in Education. With a love for fashion, she spent her earlier years modeling for department stores. She later lived in Athol and Raleigh, NC prior to moving to Holden in 1967. She spent many years working for Easter Seals as a fundraising coordinator and raised thousands of dollars for the disabled. She was very passionate about her work. Peggy also spent several years as a substitute teacher for the Wachusett School District. She and her husband were members of the Wachusett Old Car Club, the Lions Club, and she was a former member of St. Mary’s Church in Jefferson. She will be remembered for her fighting spirit, her smart wit, her passion for cheering on the Boston Red Sox, her fondness for animals and her undying love for her family. In honor of Peggy, a 5 p.m. Mass will be held this Sunday, May 23rd at St. Mary’s Church, 114 Princeton Street, Jefferson. Burial will be privately held at a later date at St. Mary’s Cemetery in Kingston, New York. In lieu of flowers, memorial contributions may be made to St. Jude Children’s Hospital, 501 St. Jude Place, Memphis, TN 38105. ([email protected]), or the Worcester Animal Rescue League, 139 Holden Street, Worcester, MA 01606. (worcesterarl.org). Arrangements are under the care of the Miles Funeral Home, 1158 Main Street, Holden. To share a memory or offer a condolence please visit "The Tribute Wall."

The family of Margaret “Peggy” A. (Scholar) Mirick created this Life Tributes page to make it easy to share your memories.