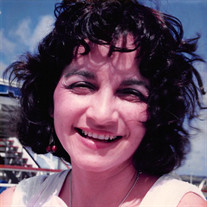 PAXTON - Maria Victoria Porras, 74, passed away peacefully on Wednesday, November 10, 2021, after an illness. Born in Barrancabermeja, Colombia, Victoria was the daughter of Rafael and Elvira (Giordanelli) Porras, and lived for the last 25 years in Paxton. Victoria was a graduate of Pontificia Universidad Xaveriana in Bogota, Colombia, South America. She received a graduate degree in Art from the Universidad Nacional de Colombia. In 1972, she moved to Salem, NH to live with her sister and taught art at the University of New Hampshire and later at Phillips Exeter Academy in Exeter, NH. She began a graphic design business with her sister, Alix, that was called Porras & Lawlor Design Studio in Salem, NH. In 1988, she met the love of her life in a church in Boston whom she later married in 1992 in North Andover. She worked as COO at her husband's dental practice for a short time before starting Victory Productions, an educational publishing company, with her brother, Carlos. The company was moved to Worcester and grew to have up to 75 full-time employees and many additional contracted employees in working offices in Colombia, Venezuela, and Argentina. Victoria owned the company for 28 years until it was sold in 2020. While still owning Victory Productions, Victoria started a second edtech company with her nephew, Owen Lawlor in 2014 called Metacog that built AI learning and training technologies and was sold in 2019. Victoria was an amazing woman, and one of the most diligent and hard-working people in the educational publishing industry. She was a force of nature who simply broke down existing barriers and glass ceilings to simply get things done. Victoria also had a penchant for helping out friends and family by employing both relatives and those who had aged out or otherwise been shut out of traditional industry employers. Additionally, she sponsored many visas to help foreign nationals legally enter the country and become both U.S. citizens and greencard holders. She was tough but also had a kind heart and sincerely helped disadvantaged and down on their luck people to do well, prosper, and flourish. She will be lovingly remembered and missed by her husband of 29 years, Dr. Arthur V. McAuley; a brother, Carlos Porras of Worcester; a sister, Alix Porras-Lawlor of Windham NH; a niece, Alexandria Lawlor-Tokanel of Windham, NH; a nephew, Owen Lawlor of Princeton; a nephew, Santiago Porras; a niece, Daniela Porras; a great-nephew, James Tokanel Jr. of Windham, NH; and a great-niece and nephew, Kayla and Alec Lawlor of Princeton. Her mother, Elvira Porras, of Windham, NH, predeceased Victoria in 2009. Relatives and friends are invited to visit with Victoria’s family from 1-3 pm on Sunday, November 14th at Miles Funeral Home, 1158 Main Street, Holden. A Mass of Christian Burial will be celebrated at 11 a.m. on Monday, November 15th at Saint Matthews Church, 2 Searles Road, Windham, NH. In lieu of flowers, the family encourages donations to the Citizens Commission on Human Rights, CCHR, 6616 Sunset Blvd, Los Angeles, CA 90028 or [email protected] To share a memory or offer a condolence, visit the "Tribute Wall" on this page.

PAXTON - Maria Victoria Porras, 74, passed away peacefully on Wednesday, November 10, 2021, after an illness. Born in Barrancabermeja, Colombia, Victoria was the daughter of Rafael and Elvira (Giordanelli) Porras, and lived for the last 25 years... View Obituary & Service Information

The family of Maria Victoria Porras created this Life Tributes page to make it easy to share your memories.

Send flowers to the Porras family.