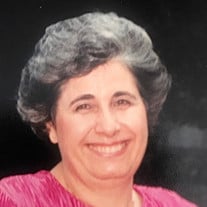 WORCESTER - Marianthe (Moullas) Bosnakis, 81 passed away on April 1, 2021, surrounded by her loving family at UMass Medical Center, University Campus following a courageous battle with cancer. Marianthe was born on the island of Lesvos, Greece, the daughter of Haralambos and Anastasia (Kandana) Moullas. She spent her childhood in the village of Kleio. In 1960 she met the love of her life, James Bosnakis while he was vacationing in Greece. After a whirlwind three-day courtship they were married on May 19, 1960. Arriving in the US as a young bride, Marianthe embraced her new family and culture. Her most treasured times were spent as a wife, mother & grandmother. An accomplished seamstress, she was employed by Whitcomb & Jordan and Cottage Tailor in Worcester. From 1989-1999 she was co-owner of P&T Pizza on Lincoln St in Worcester with her son, George. Her retirement years were spent enjoying her grandchildren. She also traveled extensively to Greece visiting her family. She spent many summers with her daughter Joy at their home in Hyannis on Cape Cod where she excelled at gardening. She frequently enjoyed extended visits with her daughter Stacy in Rhode Island. Marianthe was known for her love of cooking & baking. Her specialty dishes of spinach pie, grape leaves, and Easter bread were legendary to all who knew her. She was a gracious hostess who constantly opened her home to family and friends and she made sure no one left without leftovers. She will be lovingly missed and remembered always by her daughter Anastasia Tanionos and her husband Nicholas of Saunderstown, RI. Daughter Joy Bosnakis of Worcester, Son George Bosnakis and his wife Sandra of Holden; two brothers John Moullas and his wife Julia of Worcester, Efstratios Moullas of Kleio, Greece, a sister Zoe Georgala of Kleio, Greece, six grandchildren, Katina and Eric Tanionos, Demetria, Alexander, George, and Christy Bosnakis; her sisters-in-law, Mary Tonna of Holden and Helen Bosnakis of Worcester, many nieces, nephews and cousins. She was predeceased by her husband, James G. Bosnakis and her daughter Lee Bosnakis. Relatives and friends are invited to visit with her family on Tuesday, April 6, from 9:30 am to 11:00 am at the St. Spyridon Greek Orthodox Cathedral, 102 Russell St., Worcester. Following the calling hours, a funeral service honoring her life will take place at 11 am at the Cathedral, with the Rev. Fr. Christopher Stamas officiating. The service will be livestreamed at the Church's YouTube Channel: http://www.youtube.com/c/SaintSpyridonCathedralWorcester/videos. Her burial will follow at Hope Cemetery. In lieu of flowers, memorial donations may be made to Dana-Farber Cancer Institute, P.O. Box 849168, Boston, MA 02284-9168 or to the St. Spyridon Greek Orthodox Cathedral, 102 Russell St., Worcester, MA 01609. Funeral arrangements are under the care of Miles Funeral Home, Greater Worcester Funeral Care. MAY HER MEMORY BE ETERNAL To share a memory or to offer an online condolence, please visit the "Tribute Wall" on this page.

The family of Marianthe (Moullas) Bosnakis created this Life Tributes page to make it easy to share your memories.

Send flowers to the Bosnakis family.