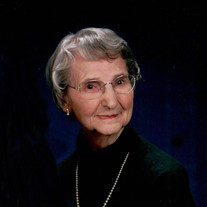 PRINCETON - Marjorie (Peck) Ollila, 106, died peacefully at home on the evening of Sunday, September 13, 2020. She was born in Angelica, Wisconsin and had lived in Princeton for 60 years. Marjorie spent her early childhood in Wisconsin and later moved to Michigan. Her compassionate spirit and desire to help those in need motivated Marjorie to pursue a career in nursing. She graduated from Bronson Hospital School of Nursing in Kalamazoo, Michigan and went on to earn a Certificate in Public Health from the University of Michigan. For several years Marjorie served as a School Nurse for the Negaunee, Michigan Public Schools. In 1942 Marjorie and her beloved husband, Leo to came to Massachusetts, in pursuit of a new career for Leo in the aerospace industry to support the war effort. They later settled in Princeton and raised their three children. After devoting several years to her family, Marjorie along with Leo, founded Luvak, Inc., providing analytical testing of metal and other materials for industrial purposes. Luvak Inc. went on to become a leader in providing innovative, reliable and accurate materials testing analysis and was well known throughout the world. Leo passed away in 2006 and Marjorie maintained ownership of the company until 2013. Marjorie's life was centered on faith, family and service to others. For many years she volunteered her services with the American Red Cross and had helped to manage their Blood Donation Center in Worcester. She had been an active member of the Oxford Women's Club in the 1950's. For many years Marjorie was a member of the First Congregational Church in Oxford where she taught Sunday School and engaged in many activities of outreach. In 1980 they joined the United Methodist Church in Rochester, NH. More recently she attended the First Congregational Church in Princeton where she leaves many friends. Marjorie was an avid Bridge player and could often be found enjoying a game with friends at the Princeton Senior Center. Marjorie was predeceased by her husband of 64 years, Leo W. Ollila in 2006. She will be lovingly missed and remembered by her twin daughters, Sandra Morrison of Westford and Susan Ollila of New York, New York; her sister, Phyllis Curtis of Manistee, Michigan; four grandchildren; seven great grandchildren; as well as several nieces and nephews. Marjorie was also predeceased by her son, Paul Ollila in 2008. Funeral services for Marjorie will be private. Miles Funeral Home, 1158 Main St., Holden is assisting the family with arrangements. To share a memory or offer a condolence visit "The Tribute Wall."

PRINCETON - Marjorie (Peck) Ollila, 106, died peacefully at home on the evening of Sunday, September 13, 2020. She was born in Angelica, Wisconsin and had lived in Princeton for 60 years. Marjorie spent her early childhood in Wisconsin and... View Obituary & Service Information

The family of Marjorie (Peck) Ollila created this Life Tributes page to make it easy to share your memories.