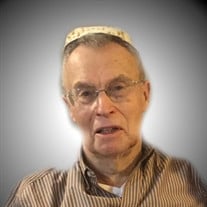 The Funeral Service for Marvin Levy will be livestreamed on Monday, October 18, 2021 at 2:00pm via the following link: https://client.tribucast.com/tcid/9431400422. The service also will be available for viewing after as well. WORCESTER- Marvin Paul Levy, age 85 died on Saturday, October 16th in UMASS Memorial Healthcare. He leaves his wife of 58 years Lila (Jonas) Levy, two sons Alan Levy and his wife Beth of East Meadow, NY and David Levy and his wife Caroline of Brooklyn, NY, a daughter, Elyse wife of Jeremy Potter of Brookline, MA and seven grandchildren, Rae, Alexis, Benjamin, Danielle, Tea, Hannah and Evie. He was predeceased by his brother Norman Levy and by his sister Florence Stein. He was born in Brooklyn, NY and was a son of Issac and Tillie (Gershkon) Levy and lived in Worcester for the past seventeen years. He graduated from Brooklyn College and received his Master’s Degree in history. He taught history at New Utrecht High School in Brooklyn and at City As School for many years, retiring in 1995. He was a member of Congregation Beth Israel, W.I.S.E. Institute, Hadassah and Technion Institute in Israel. He was an avid gardener, loved cigars and had a great sense of humor. Funeral services will be held at 2:00 PM on Monday, October 18th in Congregation Beth Israel, 15 Jamesbury Drive, Worcester under the direction of Richard Perlman of Miles Funeral Home of Holden. Burial will follow in B’Nai Brith Cemetery, Worcester. Memorial Observance will be held at 1:00PM-5:00PM on Tuesday, October 19th and 6:30PM-9:30PM on Tuesday, October 19th and Wednesday, October 20th at his residence. Memorial contributions may be made to Congregation Beth Israel, 15 Jamesbury Drive, Worcester, MA 01609 or Technion Institute of Israel or to a charity of one’s choice.

The Funeral Service for Marvin Levy will be livestreamed on Monday, October 18, 2021 at 2:00pm via the following link: https://client.tribucast.com/tcid/9431400422. The service also will be available for viewing after as well. WORCESTER- Marvin... View Obituary & Service Information

The family of Marvin P. Levy created this Life Tributes page to make it easy to share your memories.

The Funeral Service for Marvin Levy will be livestreamed on Monday,...