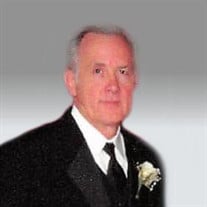 WORCESTER / RUTLAND - Maurice D. Pearson, 81, formerly of Worcester, died peacefully on Saturday, June 26, 2021 at UMass Memorial Medical Center - University Campus, Worcester. He was born in Silver Creek, Nebraska and raised the step-son of George McMenemy and Veronica (Staniec) McMenemy. His father, Delmar Pearson passed away before he was born. Maurice grew up in Worcester and graduated from South High School. He proudly served in the U.S. Air Force and went on to a career as an Accountant at L. Farber Company for 40 years, retiring in 2007. While working at L. Farber Co. he earned a Bachelor's in Accounting from Assumption College. Maurice was an avid gardener, a gifted artist and woodworker and enjoyed volunteering at the Rutland Senior Center. Above all he cherished spending time with his family and loved being a grandfather. Maurice will be lovingly missed and remembered by his wife of 60 years, Carol A. (Robinson) Pearson of Rutland; his sons, Paul Pearson and his wife, Lauren of Oakham and Stephen Pearson and his wife, Rosangela Pereira of Ludlow; his daughters, Dianne Parent and her husband, Kevin of Paxton and Jennifer Stowe and her husband, Jason of Pepperell; his brother, John "Jack" McMenemy; his grandchildren, Brian and Katherine Parent of Paxton; many nieces and nephews; as well as his life-long best friend, Dave Wilson and his wife, Pam of Oxford. He was predeceased by his sisters, Evelyn Fotter, Anne Dick and Maureen McMenemy. Relatives and friends are invited to attend calling hours from 4 to 7 p.m. on Tuesday, July 6, 2021 at Miles Funeral Home, 1158 Main St., Holden. A Funeral Service will be held at 12 noon at the Funeral Home on Wednesday, July 7th. Burial will follow at Mooreland Cemetery, Paxton. In lieu of flowers, donations may be made to the American Heart Association, PO Box 3049, Syracuse, NY 13220-3049 or to a charity of one's own choosing. To share a memory or offer a condolence please visit "The Tribute Wall."

The family of Maurice D. Pearson created this Life Tributes page to make it easy to share your memories.

Send flowers to the Pearson family.