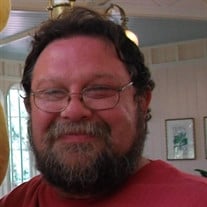 Michael Girard Hall, 62, passed away peacefully at home on Monday, June 6, 2022. He was a resident of Boylston for 33 years. Michael was born June 23, 1959, in Leominster MA. He was preceded in death by his loving family, mother Peg Hall, father Walter Hall Jr., and brother Stephen Hall. He is survived by his wife Christine A. Hall and son Daniel J. Hall of Greenfield MA. Michael attended Wachusett High School in Holden and quite a bit later in life went to the New England Institute of Technology to gain a degree in Advance Automotive Tech. He was a car enthusiast and shared his passion with his loving son Dan. As an auto technician, Michael worked on Audis, BMWs, and Jaguars. He also worked on the vehicles of his friends and family. Because of his skills he had the longest-running car in the neighborhood. Michael always had time for fun, taking his family and extended family, 2 nieces and his nephew, on trips to water parks, amusement parks, and zoos. He and his son also had fun fishing together. Michael had a soft spot in his heart for his cats and gave them lots of love and attention. Michael was a devoted husband and best friend to his wife Christine. He had a talent for trivia and Scrabble, and he challenged Chris to many games, usually winning. Michael will be greatly missed by his family. There are no formal arrangements, the family will be gathering at a later date to remember him. In lieu of flowers, donations can be made to St. Jude’s Children’s Hospital, 262 Danny Thomas Place, Memphis, TN 38105 or Sterling Animal Shelter, 17 Laurelwood Road, Sterling, MA 01564, two of his favorite organizations. To share a memory or offer condolence, please visit the "Tribute Wall" on this page.

Michael Girard Hall, 62, passed away peacefully at home on Monday, June 6, 2022. He was a resident of Boylston for 33 years. Michael was born June 23, 1959, in Leominster MA. He was preceded in death by his loving family, mother Peg Hall, father... View Obituary & Service Information

The family of Michael Girard Hall created this Life Tributes page to make it easy to share your memories.

Michael Girard Hall, 62, passed away peacefully at home on Monday,...

Send flowers to the Hall family.