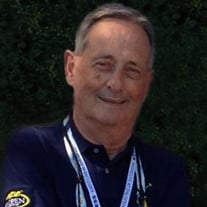 Tribute to Mike Urquhart My dad passed away on the morning of May 6th, 2021 on the National Day of Prayer at the age of 75 after a long battle fighting against the effects of years of his transplant medicines. This is not going to be your typical... View Obituary & Service Information

The family of Michael W. Urquhart created this Life Tributes page to make it easy to share your memories.

My dad passed away on the morning of...

Send flowers to the Urquhart family.