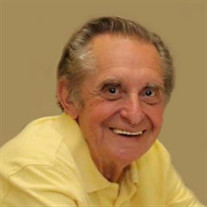 WORCESTER - Morton P. “Morty” Grossman, age 88, died peacefully on Sunday, May 9, 2021 at the Jewish Healthcare Center after a period of declining health. Morty was born in Worcester, the son of Joseph and Clara (Stigman) Grossman, and was a lifelong resident. After attending Commerce High School, he proudly served his country in the Army during the Korean War, stationed in Korea for 17 months in the Infantry. Following his military service, Morty joined his parents in the family jewelry business, eventually transitioning to a career in furniture sales, which continued for decades until his retirement. Morty was an active participant of The Torah Center of Worcester and was appreciative of the guidance and friendship of Rabbi Levi Liberow. He was also an active member of the Irving Yarock Post #32 of Jewish War Veterans. A passionate Boston sports fan, he was devoted to his Celtics, Patriots, Red Sox and Bruins. An avid walker, hiker and swimmer at the Worcester JCC, Morty could often be seen on the sidewalks of Tatnuck Square and the May and June Streets area with one of his beloved canine companions. He is survived by his cherished wife, Sheila (Fellman) Grossman of Worcester; and his devoted stepsons, Alan Gordon of Worcester, and David Gordon of Natick. A graveside funeral service will be held on Tuesday, May 11th at 12:00 noon at Worcester Hebrew Cemetery on Cemetery Road in Auburn. Arrangements are under the direction of Miles Funeral Home of Holden. Morty’s family would like to express their heartfelt appreciation to Steve Willens, Vinny Librandi and the staff of the Jewish Healthcare Center for their compassionate dedication and loving care at Morty’s “Home Away From Home.” Memorial Contributions may be made to the Jewish Healthcare Center, 629 Salisbury Street, Worcester, MA 01609.

WORCESTER - Morton P. &#8220;Morty&#8221; Grossman, age 88, died peacefully on Sunday, May 9, 2021 at the Jewish Healthcare Center after a period of declining health. Morty was born in Worcester, the son of Joseph and Clara (Stigman) Grossman,... View Obituary & Service Information

The family of Morton P. Grossman created this Life Tributes page to make it easy to share your memories.

Send flowers to the Grossman family.