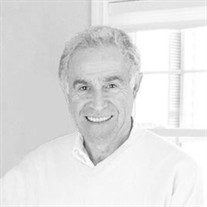 Rutland/Holden - Patrick Z. "Pat" Sarkisian, 79, a longtime resident of Holden and Rutland and prominent business owner died peacefully at home, on Wednesday, September 8, 2021, with his beloved wife at his side after a long battle with Inclusion Body Myositis. Patrick was born in Holden on March 26, 1942, the son of Sarkis and Nectar (Vanetzian) Sarkisian and was raised in Rutland. Pat was a graduate of Rutland Grammar School and Wachusett Regional High School, class of 1960, where he met his one true love, Carol. They would later marry and share 58 years together. Pat had a life-long passion for sports. As a young boy, he received the most valuable player of the year in Little League and the Gene Boulanger Memorial Scholarship Award, he was the first player to receive this award. Pat would later coach and sponsor Rutland Little League teams for many years. Pat later served as President of the Recreational Council, which sponsored many activities for the young people living in the Town of Rutland. Pat was the founder and President of Sarkisian Builders, Inc. for 57 years. Through the years Pat's name has become well-recognized and well respected in the Wachusett Region. Pat began his career as a subcontractor for Capital Siding. It was while working there that Pat made the decision to become a carpenter. Shortly thereafter, Pat went into business on his own, forming Sarkisian Builders Inc. in 1962. Pat went on to be an influential member of several local business organizations including the Worcester Regional Chamber of Commerce, the Wachusett Area Chamber of Commerce, the Wachusett Rotary Club and had been a member of the Better Business Bureau since 1985. Pat was instrumental in creating an affiliation between the Worcester Regional Chamber of Commerce and the Holden Area Chamber of Commerce. This enhanced and expanded regional capabilities and opportunities in economic development for the new Wachusett Area Chamber of Commerce. He received the Worcester Regional Chamber of Commerce Regional Business Member of the year Award in 2002. Pat was named Rotarian of the Year for district 7910 for his financial/membership contributions that were above and beyond to the local Rotary Club. He also was awarded a double Paul Harris Fellow for his outstanding contributions to Rotary International and the Distinguished Service Award from the Wachusett Area Rotary Club. Pat was also recognized by The Holden Area Chamber of Commerce with a Salute Breakfast in 2004 for his many contributions to the Wachusett Region both as a long-time business owner and as an active community volunteer. He was awarded the Holden Area Chamber of Commerce Leadership award in 2013. For many years Pat sponsored the Chamber of Commerce Golf Tournament Scholarship Scramble. Through the Rotary Club Pat helped sponsor service dog training at NEADS, to provide dogs to wounded veterans. He spearheaded the Rotary's Outhouse Project for five years, raising over $70,000 for Rotary to donate to scholarships, the food pantry and building wells in Haiti. Pat was also instrumental and the driving force behind bringing the Town of Rutland’s ambulance service, from an all-voluntary squad to hiring EMTs and then improving the service to paramedical level. Pat was a champion backgammon player and an avid New England sports fan. He enjoyed golf, horseshoes, cribbage pitch and gin. He loved writing and sharing his thoughts on many topics which he wrote about over the years. Pat and Carol enjoyed traveling and visited many destinations with their close friends. Pat always believed in giving back to his community. He put himself out there to help whenever he could. He believed in many organizations including the food pantry and coats for kids. He was a humble man. Pat is survived by his beloved wife of 58 years, Carol A. (Hammond) Sarkisian; his sons, Patrick Sarkisian and his partner, Bruce Varner of Holden and Greg Sarkisian and his fiancé, Ana Ceja of Rutland; his daughter, Lisa Sarkisian and her partner, Elizabeth MacLaughlin of Petaluma, CA; his grandchildren, Sarah (Sarkisian) Johnson and her husband Eric of Worcester, John Sarkisian of Holden and Ryder Sarkisian of Rutland. He is also survived by his sister-in-law, Nancy Lee Sarkisian of Auburn; his brother-in-law, David Hammond and his wife, Marcia of Sturbridge; as well as many nieces and nephews. He was predeceased by his brothers, William, Moses and James Sarkisian all of Auburn. He also leaves many wonderful friends. The Sarkisian family would like to express their sincere appreciation for all the help and time provided by Notre Dame Hospice of Worcester, with special thanks to Steven Burokas, Karen LaCure, Sharon Guidaboni, Gary Vacha, Bonnie Young, Beverlyn Nimoh and Renee Horan. We would also like to thank Dr. Daniel Massarelli, MD for all the care that he provided over the years especially for his kindness and friendship. Relatives and friends are invited to gather with Pat's family from 4 to 7 p.m. on Thursday, September 23 at Miles Funeral Home, 1158 Main St., Holden. A Memorial Service will be held at 1 p.m. on Friday, September 24 at the First Congregational Church of Rutland, 264 Main St., Rutland. Burial will be private. The family requests that in lieu of flowers memorial contributions be made to Rotary International, https://my.rotary.org/en/donate or to Notre Dame Hospice, Attn: Development Office Notre Dame Health Care Center, 555 Plantation Street Worcester, MA 01605 or to NEADS, P.O. Box 1100, Princeton, MA 01541. To share a memory or offer a condolence visit "The Tribute Wall" on this page.

Rutland/Holden - Patrick Z. "Pat" Sarkisian, 79, a longtime resident of Holden and Rutland and prominent business owner died peacefully at home, on Wednesday, September 8, 2021, with his beloved wife at his side after a long battle with Inclusion... View Obituary & Service Information

The family of Patrick Z. "Pat" Sarkisian created this Life Tributes page to make it easy to share your memories.

Send flowers to the Sarkisian family.