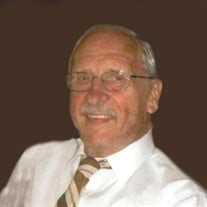 RUTLAND - Paul B. Anderson Jr., 85, passed away on Wednesday, March 17, 2021, at St. Vincent Hospital, Worcester, after an illness. He was born in Holden, the son of the late Paul B. Sr. and Elsa I.M. (Soderberg) Anderson, and lived in Rutland before moving to the Notre Dame Community. He leaves his son, Kevin P. Anderson and his wife, Mary Jeanne of Spencer; his daughters, Kristine J. Rhodes and her husband, Daniel of Virginia Beach, VA, and Kimberly I. Gamblin and her husband, Norman of Princeton; six grandchildren, Ashley, Justin, Andrew, Jamie, Courtney and Jillian; three great-grandchildren, Francis, Jameson, and Armen; and numerous nieces and nephews. He was predeceased by his beloved wife, Joyce E. (Forget) Anderson, and his brothers, Richard Anderson and Robert Anderson. Paul attended Holden High School and has kept in touch with many of his classmates. He retired from Norton Co. as a Production Supervisor. He also worked at Sunny Side Motors, Gibson's in Holden, and Ground Control in Sterling. Paul and family-owned and operated a boarding kennel in Rutland where he served as Dog Officer for the town. Paul was active with his children's and grandchildren's activities including transporting them to various sporting practices and games. He was an avid sports fan and was a life-long fan of all the Boston professional sports teams. He and his wife were regular attendees of St. Patrick's Church before moving to Notre Dame. Paul enjoyed the water walking exercise program at the Greendale YMCA and his trips with the Greendale Retired Men's Club. In his spare time, he loved to solve Sudoku puzzles and complete jigsaw puzzles. There was never anything he couldn't fix, redesign or improve. Family and friends will always remember the annual Fourth of July clambake hosted by Paul and his wife. Relatives and friends are invited to attend a Mass of Christian Burial honoring and celebrating Paul's life at 10 a.m. on Tuesday, March 23, 2021, at St. Patrick's Church, 258 Main St., Rutland. Interment will follow at Worcester County Memorial Park 217 Richards Ave., Paxton. Arrangements are under the care of Miles Funeral Home, 1158 Main St., Holden. In lieu of flowers, donations may be made to Greendale Retired Men's Club 75 Shore Drive, Worcester, MA 01605. To share a memory or to offer an online condolence, please visit the "Tribute Wall" on this page.

RUTLAND - Paul B. Anderson Jr., 85, passed away on Wednesday, March 17, 2021, at St. Vincent Hospital, Worcester, after an illness. He was born in Holden, the son of the late Paul B. Sr. and Elsa I.M. (Soderberg) Anderson, and lived in Rutland... View Obituary & Service Information

The family of Paul B. Anderson, Jr created this Life Tributes page to make it easy to share your memories.

Send flowers to the Anderson family.