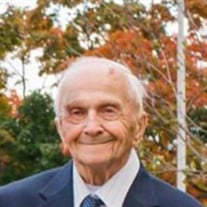 WEST BOYLSTON – Paul "Squeaky" Bagdis, 91, beloved husband of Lois Ann (Proctor) Bagdis, passed away peacefully on Wednesday, May 12, 2021 at the UMass Memorial Medical Center. Born in Millbury and raised in Worcester, he was a son of Joseph and Anna (Dirsa) Bagdis. As a young man, Paul proudly served his country in the United States Army. He went on to enjoy a long career as a laborer with the Metropolitan District Commission and the Massachusetts Water Resources Authority, retiring as a Power Station Operator after thirty-seven years of dedicated service. In his spare time Paul could often be found tending to his garden or walking the dog. He was a member of the Harold N. Keith American Legion Post #204 in West Boylston. He will be lovingly missed and remembered by his wife of 68 years, Lois Ann; his two sons, Kevin Bagdis and his wife, Lynn of West Boylston and Todd Bagdis, and his wife, Heather of Sweden, ME; his three daughters, Jill Bagdis of West Boylston, Laurie Williams and her husband, Randy of Brownington, VT and Robin Burke and her husband, Norman of Warren; 7 grandchildren; 4 great-grandchildren; several nieces and nephews; and his “buddy”, Michael Beaupre. In addition to his parents, Paul is predeceased by his brother, Steve Bagdis and his sister, Nellie Marquis. Relatives and friends are invited to gather with the family on Saturday, May 22 from 11 a.m to 12 noon in the Miles-Sterling Funeral Home & Tribute Center, 100 Worcester Road, Sterling. A memorial service honoring Paul’s life will be held at 12 p.m. in the funeral home. Burial will follow at High Plains Cemetery, High Street, Oakdale. To share a memory or offer a condolence please visit "The Tribute Wall."

WEST BOYLSTON &#8211; Paul "Squeaky" Bagdis, 91, beloved husband of Lois Ann (Proctor) Bagdis, passed away peacefully on Wednesday, May 12, 2021 at the UMass Memorial Medical Center. Born in Millbury and raised in Worcester, he was a son of... View Obituary & Service Information

The family of Paul Bagdis created this Life Tributes page to make it easy to share your memories.

Send flowers to the Bagdis family.