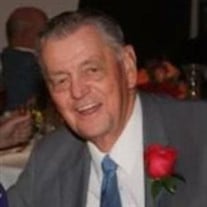 JEFFERSON – Paul R. Becker, 87, beloved husband of Karen (Hubert) Becker, passed away peacefully on Thursday, October 7, 2021. Born and raised in Worcester, he was the son of the late Frank and Alice (Motland) Becker. Paul proudly served his country with the United States Army during the Korean Conflict. Upon his return, Paul earned his master’s degree from Worcester State College and soon began his teaching career at the Thomas Prince School in Princeton. After 38 years of dedicated service to his students, he retired in 1995. Paul was a former member of St. Michael on the Heights Church in Worcester. He was a member of the American Legion Post 2 in Holden and the Veterans of Foreign Wars. Paul was an avid golfer and a member of the Wachusett Teacher Golf League as well as the Wachusett Bowling League. In his spare time, he could often be found collecting photos and postcards of Quabbin Reservoir or diligently working on his contest entries and coin collection. His contest entries paid off nicely as he won trips to Paris, Switzerland, Spain, Fiji, New York City, Las Vegas, Indi 500, and others as well. He enjoyed visiting flea markets and yard sales as well as traveling across the county attending National Scrabble Tournaments with his two sons. Paul also spent many hours with his dogs over the years and loved raising and showing Irish Wolfhounds. He was also a true sports fan, and always looked forward to watching his grandchildren play in person. He also enjoyed following the Atlanta Braves and Holy Cross teams. Paul was very proud of his family and enjoyed spending time with them. One of Paul’s most treasured memories was the family cruise he took in February of 2009. All of his children and many of his grandchildren went and a wonderful time was had by all. He will be lovingly missed and remembered by his wife of eighteen years, Karen; his daughters, Elizabeth White and her husband, Kevin of Jefferson, Annmarie Brackett and her husband, Ernest of Sterling, Susan Boone and her husband, Steven of Holden and Amy Smith and her husband, Todd of Holden; his two sons, Robert Becker and his wife, Jane of Jefferson and Joseph Becker of Fitzwilliams, NH; his step-daughter, Lisa Larson and her husband, Kenneth of Jefferson with whom he and Karen have made their home for the past fourteen months; a sister, Kristine Gorczynski and her husband, Kenneth of Auburn; 11 grandchildren and 6 great-grandchildren. He also leaves behind his faithful friend, Gus. In addition to his parents, he was predeceased by his first wife, Ann (Altonen), an infant daughter, Jane Becker, his sister, Jean Fisk, and his step-daughter Susan Foley-Robinson. Relatives and friends are invited to visit with the family from 6 to 8 p.m. on Tuesday, October 12 in the Miles Funeral Home, 1158 Main Street, Holden. A funeral service honoring his life will be held at 11 a.m. on Wednesday, October 13 in the funeral home. Burial will follow at St. Mary’s Cemetery, Holden. In lieu of flowers, memorial donations may be made to the Thomas Prince School, 170 Sterling Street, Princeton, MA 01541 To share a memory or to offer an online condolence, please visit the "Tribute Wall" on this page.

The family of Paul R. Becker created this Life Tributes page to make it easy to share your memories.

Send flowers to the Becker family.