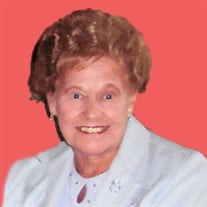 WORCESTER - Pauline T. (Phaneuf) Gosselin, died on the evening of her 94th birthday, Monday, November 22, 2021, at the Jewish Healthcare Center, Worcester. Pauline was born in Worcester, the daughter of the late Adolphe and Delia (Contois) Phaneuf. Over the years she lived in Cherry Valley, Worcester and Holden. Pauline graduated from Commerce High School with the class of 1946 and attended Salter Secretarial School. She worked as a Legal Secretary for Attorney Edward Simpson for several years. She later worked at WCIS as a Customer Service representative earning several awards before retiring in 1992. Pauline married her one true love, Dr. H. Charles Gosselin in 1950. The couple shared over 20 years of marriage and four daughters before Dr. Gosselin's passing in 1971. Pauline's life was dedicated to living her faith, serving her community and cherishing her family and friends. She was a devout member of St. Mary's Church in Jefferson and had taught CCD at Our Lady of the Rosary Church in Worcester. Proud of her French heritage, Pauline was a member of the Cercle Jeanne-Mance de Worcester. She was also active in the Worcester District Dental Society Auxillary and participated in the Silver Sneakers program at the Greendale YMCA. Pauline took great pride in raising her daughters and eagerly celebrated at all of their family gatherings. She always had a smile and a warm greeting to all she encountered. For over 50 years Pauline enjoyed getting together with her friends to play cards and to savor their delicious desserts. She loved being out in the sunshine especially at Hampton Beach and Cape Cod. Pauline was affectionately known as Gram and Gee by her grandchildren, great-grandchildren and their friends. She enthusiastically supported all of their artistic and athletic pursuits. She was very happy and relieved to witness the Red Sox World Series wins. Pauline is survived by her daughters, Sharon Lowder of Holden, Charline Trombly and her husband, Glenn of Worcester, Celeste Gauthier and her husband, David of Florida and Michelle Horrigan and her husband, Stephen of Jefferson; her grandchildren, Amy Campbell and her husband, John, Scott Lowder and his wife, Christine, Greg Lowder, Todd Trombly and his wife, Michelle, Erica Harp and her husband, George, Kyle Gauthier and his wife, Silke, Nicole Austin and her husband, Scott, Andrew Gauthier, Katherine and William Horrigan; her great-grandchildren, Travis and Chelsea Campbell, Caroline, Isabel and Charlie Lowder, Esther and Theodore Trombly and Molly Pauline and Riley Austin; as well as several nieces and nephews, especially her niece, Joan Noonan. Pauline was predeceased by her brothers, Francis and Edgar Phaneuf; her sisters, Doris Noonan and Jeannette Mulhern; and her grandson, Joshua Lowder. The family wishes to thank the staff at the Jewish Healthcare Center for the support and compassion they provided. Relatives and friends are invited to attend calling hours from 4 to 7 P.M. on Thursday, December 2, 2021 at Miles Funeral Home, 1158 Main St., Holden. A Mass of Christian Burial will be celebrated at 10 A.M. on Friday, December 3, 2021 at St. Mary's Church, 114 Princeton St., Jefferson. Burial will follow at Notre Dame Cemetery, 162 Webster St., Worcester. In lieu of flowers donations may be made to St. Mary's Church, 114 Princeton St, Jefferson, MA 01522 or to the American Heart Association, 300 5th Ave., Waltham, MA 02451. To share a memory or offer an online condolence visit "The Tribute Wall."

WORCESTER - Pauline T. (Phaneuf) Gosselin, died on the evening of her 94th birthday, Monday, November 22, 2021, at the Jewish Healthcare Center, Worcester. Pauline was born in Worcester, the daughter of the late Adolphe and Delia (Contois)... View Obituary & Service Information

The family of Pauline T. (Phaneuf) Gosselin created this Life Tributes page to make it easy to share your memories.

Send flowers to the Gosselin family.