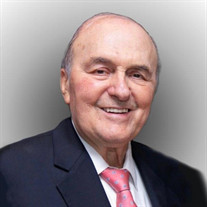 Perry R. Pero, 82, fell asleep in our Lord on May 19, 2022. Beloved husband of Diane Pero nee Peters. Loving father of Alexis Pero (fiancé Austin Burroughs and his daughter Audrey Burroughs) and Arthur (Lauren) Pero. Proud grandfather of Ava and Mila Pero. Dear brother of Shirley Pero and the late Louis (survived by Barbara) Pero. Devoted son of the late Steven and Eleni Pero. Dear uncle, cousin, godfather, business associate, and friend to many who will miss him. In 1939, Perry was born in Worcester, Massachusetts, to Steve and Eleni Pero, immigrants from Korçë, Albania. In this household, his first language was Albanian, and he was immersed in the Albanian culture. As a result of his father’s influence and stressing the importance of education, Perry always started his day reading the New York Times. Perry sang in the St. Mary’s Assumption Albanian Orthodox Church choir and attended Albanian language school where he learned to read and write Albanian. Starting at age 12 until he graduated from Classical high school, Perry worked part-time delivering approximately 200 newspapers, seven days a week, after developing one of the largest paper routes in Worcester. After high school, Perry attended Clark University in Worcester. His newspaper earnings and his part-time job as a drug store clerk paid entirely for his college education. He excelled at Clark, and in 1961 he was elected to Phi Beta Kappa and graduated Cum Laude with High Honors in Economics. In 1989, Clark University invited him to serve on the Board of Trustees where he served for 21 years (1989-2010). In the Fall of 1961, Perry entered Harvard Business School and graduated in 1963 with an MBA. While at Harvard, he was hired by Northern Trust Corporation in Chicago. Prior to arriving in Chicago, he entered the United States Army Reserves, completed a six-month Active Duty, and served the next six years in the Army Reserves (1963-1969). Finally, in January 1964, Perry began his career with the Northern, serving in a wide variety of roles for more than four decades from 1964-2005. His career spanned a remarkable progression from assistant cashier to Chief Financial Officer for the corporation for sixteen years from 1988-2004. He retired in 2005 as Vice Chairman and Head of Corporate Risk Management, while also Chairman of the Corporate Asset and Liability Committee. Although officially retired, Perry continued to actively serve on five major Chicago not-for-profit boards, including Rush University Medical Center, Glenwood Academy, Local Initiative Support Corporation, the CORE Foundation, and as Chairman of Masonic Family Health Foundation. Above all else, family was Perry’s primary focus. Fortunately, Chicago Albanian Americans had chartered an ANNO chapter in 1963. At the 1964 Chicago AANO Convention, he met his future wife, Diane Peters. In 1968, they were married at St. Mary’s Assumption Albanian Orthodox Church in Worcester and then returned to live in Chicago and Oak Park where their children Alexis and Arthur were born. His children and grandchildren were his greatest joy. Family and friends are invited to meet with Perry’s family from 10:00 – 11:30 AM on Wednesday, May 25, 2022, in St. Mary’s Assumption Albanian Orthodox Church, 535 Salisbury Street, Worcester. A funeral service will follow at 11:30 AM. Burial will be in Hope Cemetery, Worcester. If you wish to remember Perry, donations may be made to the International Orthodox Christian Charities (IOCC) Program Category UKRAINE (online); St. Nicholas Albanian Orthodox Church on web site Stnicholasalbanianchicago.org; or St. Mary’s Assumption Albanian Orthodox Church, 535 Salisbury Street, Worcester 01609; or AANO scholarship fund, www.aano.org. Arrangements are under the direction of Philip G. Haddad, Jr., Miles Funeral Home, 1158 Main St. Holden. MAY HIS MEMORY BE ETERNAL! To share a memory or offer condolence, please visit the "Tribute Wall" on this page.

The family of Perry R. Pero created this Life Tributes page to make it easy to share your memories.

Send flowers to the Pero family.