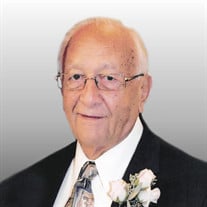 HOLDEN/RUTLAND - Peter M. "Buddy" DeLuca, 93, formerly of Rutland, passed away on Friday, January 7, 2022. Born in Salt Lake City, Utah on January 15, 1928, Buddy was the son of Peter and Jeanette (Caloiaro) DeLuca and moved to Rutland at the age of 6 where he lived most of his young life. He will be lovingly remembered and missed by his three sons, Michael C. DeLuca and his wife, Janet Foss DeLuca of Holden, Peter DeLuca and his wife, Monica of West Linn, Oregon, and Thomas W. DeLuca and his wife, Sherrie of Little Rock, Arkansas; a sister, Shirley Brindley of Oxford; nine grandchildren, Kathryn Sacco, Amy, Bradford, Peter, Blake, David DeLuca, Marisa McCormick, Elizabeth Waldo, Christina Foss; and eight great-grandchildren, Emma, Anna, Asher, Logan, Cora, Quinn, Addison, and Avery. Buddy is predeceased by his wife, Patricia J. (Stevenson) DeLuca. After graduating from Rutland High School, Peter served in the army for two years. He then worked in construction in Rutland where he met the love of his life, Patricia Stevenson. They dated for a year and then married on May 28, 1955, at St. Joseph-a-Becket Church in South Barre. They spent the following year building a new home in Rutland where they resided for the following 20 years and raised their three sons. They moved to Holden in the late ’70s. Hard work was the hallmark of Peter DeLuca's life. During the early stages of his career, Bud worked in construction. He then worked at Barre Wool during the day and built the family home after work at night. With the evolution of the plastic industry, Buddy saw an opportunity to advance his career and enrolled at Lowell Technical Institute to study plastics. Buddy moved on to work at Dapol Plastics in Worcester as Plant Manager. After that point in time, Buddy and three partners started their own company, AMS Industries, where he handled manufacturing and engineering. He was instrumental in inventing the plastic trash barrels that are still used today. They went on to own five locations throughout the U.S. After the company was well-established, they sold to United Plastics where Buddy stayed on as an employee and consultant well into his 70's. He retired and shortly after his beloved wife, Pat, developed Alzheimer's and he became her caretaker. Buddy was a devoted husband and he and Pat exemplified true love for all 61 years of their marriage. He was very proud of his family. He loved hunting and fishing with his sons, which he did for most of his life. He also created wonderful memories for his family on Cape Cod where they would spend summer vacations in West Yarmouth. He enjoyed sport-fishing and clamming with his grandchildren who remember taking the clams out of the bucket and putting them back in the sand. As the years passed, Buddy spent much of his retirement with his great-grandchildren. Their bond made them feel special and you could sense it with a glance. Bud was a great cook and many family and friends enjoyed a delicious shrimp scampi at his table. He will be remembered as the shoulder to lean on, the person you could always count on with a firm hand and a warm heart. Relatives and friends are invited to visit with Buddy's family from 4 to 7 PM on Friday, January 14, at the Miles Funeral Home, 1158 Main St., Holden. A Mass of Christian Burial will be celebrated at 10 AM on Saturday, January 15, at St. Patrick's Church, 258 Main St., Rutland. Interment will follow at Worcester County Memorial Park, 217 Richards Avenue, Paxton. In lieu of flowers, the family asks that donations be made in memory of Peter M. DeLuca, to St. John's High School, 378 Main St. Shrewsbury, MA 01545 To share a memory or offer a condolence, please visit the "Tribute Wall" on this page.

HOLDEN/RUTLAND - Peter M. "Buddy" DeLuca, 93, formerly of Rutland, passed away on Friday, January 7, 2022. Born in Salt Lake City, Utah on January 15, 1928, Buddy was the son of Peter and Jeanette (Caloiaro) DeLuca and moved to Rutland at the... View Obituary & Service Information

The family of Peter M. "Buddy" DeLuca created this Life Tributes page to make it easy to share your memories.

Send flowers to the DeLuca family.