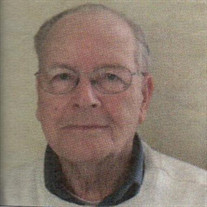 PRINCETON - Raymond H. Lawson, 90, a longtime resident and former Chief of Police of Princeton, died peacefully on Saturday, October 2, 2021 at Newton-Wellesley Hospital. He was born in Worcester, the son of the late Frances (Harkins) LeMay and grew up in Holden. Raymond's life was centered on service to his faith, family, community and country. He graduated from Holden High School and enlisted in the U.S. Air Force. He proudly served in the Korean War and had a passion for flying planes. Ray became a private pilot and at one time he also helped build a helicopter. Ray moved to Princeton in 1964 and married his dear, devoted wife, Elisabeth A. (Gustafson). He became a Police Officer in 1971 and served as Police Chief, retiring in 1987. Ray was a member of the Oakdale United Methodist Church in West Boylston where he leaves many wonderful friends. He was a member of the Hiram O. Taylor American Legion Post in Sterling. Ray had an aptitude for fixing all things mechanical and enjoyed helping neighbors and friends repair their lawnmowers and snowblowers. He enjoyed the thrill of car races and travelling to NASCAR events, as well as the challenge of repairing cars of all makes and models, including his family members' cars. Ray had a special affection for all animals, especially dogs – both his own and his family members’. Raymond is survived by his wife, Elisabeth A. (Gustafson) Lawson; his son, William Lawson of Nashua, NH; his daughters, Lynne Lawson and her partner, Mick Gambaccini of Sterling, Cynthia O'Neil of Westboro, Dawn Murphy and her husband, Kevin of Rutland and April Murray and her husband, Chris of Auburn; his brother, William LeMay and his wife, Gail of Rutland; 12 grandchildren, 15.8 great grandchildren; several nieces and nephews; his daughter-in-law, Gail Lawson of Oxford; his sister-in-law, Riitta LeMay of Leverett; and his brother-in-law, Gary Foster of N.C. Raymond was predeceased by his son, Robert Lawson, his brother, Richard LeMay and his sister, Patricia Foster. Relatives and friends are invited to gather with Raymond's family from 5 to 8 p.m. on Thursday, October 7, 2021 at Miles Funeral Home, 1158 Main St., Holden. A memorial service honoring and celebrating his life will be held at 11 a.m. on Friday, October 8, 2021 at Oakdale United Methodist Church, 15 N. Main St., West Boylston, MA, 01583. Burial will be private. In lieu of flowers donations may be made to OUMC. To share a memory or offer an online condolence visit "The Tribute Wall."

PRINCETON - Raymond H. Lawson, 90, a longtime resident and former Chief of Police of Princeton, died peacefully on Saturday, October 2, 2021 at Newton-Wellesley Hospital. He was born in Worcester, the son of the late Frances (Harkins) LeMay... View Obituary & Service Information

The family of Raymond H. Lawson created this Life Tributes page to make it easy to share your memories.

Send flowers to the Lawson family.