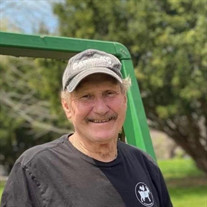 STERLING – Raymond Carl Louchart, beloved husband, father, grandfather, brother, teacher and friend to many, passed away on Sunday, January 2, 2022 at Clinton Hospital. He was 74. Born in Saginaw, MI, the son of the late Theophile and Germaine (Mattus) Louchart. Ray graduated from high school in 1964 and immediately enlisted in the United States Air Force and served his country honorably for 4 years. He attended history classes at Saginaw Valley State College while becoming a talented welder and horse trainer during that time. Ray had his daughter, Heather Marie, while living in Grayling, MI. After a few years, he decided to move to Arizona where he ran the Trading Post in Cibecue, AZ, where many of the local Apache gave him the name, Brother Fox. A lover of music, Ray would play guitar in many local venues. At Christopher Creek Lodge, he met his future wife, Darlene Patten. The two quickly fell in love and she moved to the reservation with him. They had a son, Justin Michael there, and then moved to Sterling where they would reside till this day. They had another son, Jared Stephen, while in Massachusetts. Ray went to teach for his wife’s family business, the Sterling Nursery School, where he would have an immensely positive impact on the youth of greater Sterling for over 25 years. One of the last great American cowboys, Ray experienced more in his life than most. From riding his tractor and tending to his farm animals to fishing and playing music with family and friends, Ray lived his life to the fullest. He felt most at home being with his family, his kids and his grandkids. Ray will be missed dearly by all of those lives he touched throughout his journeys. Ray is survived by his loving wife, Darlene J. (Patten) Louchart; his daughter, Heather Louchart and Joseph Sullivan of Bay City, MI; his two sons, Justin Louchart and his wife, Nicole of Lewiston, ID, Jared Louchart and his wife, Jerrica of Sterling; a brother, Dennis Louchart and his wife, Lynne of Tonopah, AZ, a sister, Mary Kay Louchart of Bronx, NY; and nine-grandchildren, Brandon, Morgan, Chase, Grady, Brooke, Patten, Anjolie, Jameson and Jemma. Besides his parents, Ray is predeceased by his brothers, Ted and Paul Louchart. Many beloved nieces, nephews, friends will dearly miss Ray in their lives. Relatives and friends are invited to visit with Ray’s family from 3:00 to 6:00 pm on Thursday, January 6th, at the Miles-Sterling Funeral and Tribute Center, 100 Worcester Rd., Sterling. A Funeral Service with military honors will follow at 6:00 pm at the funeral home. In lieu of flowers, memorial donations may be made to the Wounded Warrior Project, P.O. Box 758516, Topeka, Kansas 66675-8516. To share a memory or offer a condolence, please visit his tribute wall.

STERLING &#8211; Raymond Carl Louchart, beloved husband, father, grandfather, brother, teacher and friend to many, passed away on Sunday, January 2, 2022 at Clinton Hospital. He was 74. Born in Saginaw, MI, the son of the late Theophile and... View Obituary & Service Information

The family of Raymond "Ray" C. Louchart created this Life Tributes page to make it easy to share your memories.

Send flowers to the Louchart family.