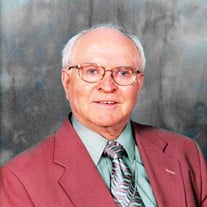 LEICESTER, MA / NORWICH/CT - The Rev. Robert W. Wright, age 92, passed away on Tuesday, September 4, 2020 after his family and friends had said their goodbyes. He was born at Fairlawn Hospital in Worcester, MA on March 24, 1928. while living in Leicester where his father taught business at the high school. His family moved to Manchester, CT in 1931 where he graduated from Manchester High in 1946. He had fond memories of delivering milk, first with his father and then on his own, for Dart Dairy in high school and college. He graduated with a BA from Drury College in Springfield, Missouri in 1952. While working as a director at summer Camp Claire on Hamburg Cove in CT he met and fell in love with the camp nurse, Florence F. Kannenberg and were married on June 6, 1953. He went on to receive a master’s degree in church social work from Andover-Newton Theological School. Bob and his wife were executive directors of Boys Village, a home for boys from broken homes, in Milford, CT from 1954-1959. Their first 3 children, Susan, Carol and Jeffrey were born there. He then attended Hartford Seminary and received his Bachelor of Divinity degree in 1960. He was then ordained at his first church, Second Congregational Church of Suffield in West Suffield, CT in 1960 where his daughters, Linda and Virginia were born. He moved to Woodbury, CT in 1968 where he was a Pastor at the First Congregational Church, one of two Congregational Churches in town, the other being pastored by, coincidentally, another Rev. Wright. During his time there he also became an EMT and drove for the town’s ambulance which he thoroughly enjoyed and became known by the moniker of REVBOB which became his license plate from there on. He and his wife brought foster son, James Greenfield, into the family during this time. He moved to North Franklin, CT to pastor the Franklin Congregational Church in 1980. He retired in 1990 but continued to take short interim pastorates as well as becoming a part-time chaplain at the Backus Hospital in Norwich, CT and continued until at age 90 he went to live with his daughter, full circle, in Leicester. He was the loving caretaker of his wife, paralyzed in a car accident, for 4 long years until she died in 2002. Like his father, Bob liked to camp and travel. He loved taking his family, first in van and tent and then in 4 different motorhomes, to visit different states and National Parks. He took several cross country trips to visit many National Parks with his children, grandchildren and even a high school class. He was a rock & mineral hound and got the whole family involved in searching out rocks & minerals in the most unlikely places. He was a collector at heart and when he retired had a collection of 1200 ties - yes he counted them. He had many sayings such as: "We’re off like a herd of turtles", when he got all the family in the vehicle; or when asked what his name was would say “Bob spelled the same backwards as forwards”; or asked how he was doing say “What you see is what you get”; or when the nurses where he was a chaplain would ask he’d say “they haven’t put me in a johnny yet”!. He loved people, travel, reading, collecting rocks & minerals, ties and gadgets. He led a good and full life. Bob was predeceased by his wife, Florence Kannenberg Wright; his daughter, Carol Lynn Wright and brother, Roderick A. Wright. He leaves behind a brother, Russell Albin Wright of Visalia CA; daughter, Susan Lee Peterson of East Hampton MA, son, Jeffrey Robert & Doreen Wright, Sr. of Hampton CT, daughter, Linda Joan & Michael Cole of Leicester, daughter, Virginia Beth Wright of Vass, NC; a foster son, James Greenfield; grandchildren, Joshua & Ethan Cole, Skip Peterson and Jeffrey Wright Jr. and his wife, Deborah; great-grandchildren, Hunter and Lyndsey Wright. He will also be especially missed by granddaughter, Jessica Wright of Boca Raton, FL and niece, Robin & Patrick Buckey and their children, Jenna & Patrick of East Hartford and nephew, Donald & Janet Wright and their children Virginia & Katie of McLeansville, NC. Service and burial will be held in the spring in Connecticut. Memorial gifts may be sent to the John Marcure Scholarship, for seminary tuition assistance. Checks made payable to: New London Association, ℅ Ede Steele, 11 Butternut Dr., Norwich, CT 06360-3023. Funeral arrangements are under the care of Miles Funeral Home, 1158 Main St., Holden, MA.

LEICESTER, MA / NORWICH/CT - The Rev. Robert W. Wright, age 92, passed away on Tuesday, September 4, 2020 after his family and friends had said their goodbyes. He was born at Fairlawn Hospital in Worcester, MA on March 24, 1928. while living... View Obituary & Service Information

The family of Rev. Robert W. Wright created this Life Tributes page to make it easy to share your memories.

Send flowers to the Wright family.