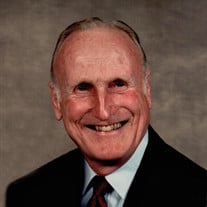 HOLDEN / WORCESTER - Richard M. Karsberg, 98, died peacefully on Sunday, August 8, 2021 at Eisenberg Assisted Living Residence in Worcester. Richard was born in Worcester, the son of Eric and Florence (Malm) Karsberg, and graduated from North High School in Worcester. Richard proudly served in the 677th Bombardment Squadron of the United States Army Air Force. He was stationed in India and Tinian in the Mariana Islands during World War II. He earned an Engineering Degree from Wentworth Institute of Technology in Boston. He went on to work at the former Norton Company for 37 years as a Ceramic Engineer. He was the Supervisor of Kiln Projects in Central Engineering. Richard was a member of St. Luke's Episcopal Church in Worcester. He was a proud sixty year member of the Freemasons of West Boylston at Boylston Lodge A.F. and A.M. Richard was also active in the Greendale YMCA and Worcester Tennis Club over the years. He was an avid tennis player who played well into his later years. He was a dedicated volunteer, and especially enjoyed reading for the Massachusetts Association for the Blind and Visually Impaired. Richard was predeceased by his wife of 65 years, Norma C. (Storey) Karsberg in 2016. He will be missed and remembered by his sons, Donald R. Karsberg of Worcester and Joel E. Karsberg and his wife, Jeanne of Medway; his daughter, Nancy D. Karsberg of Northborough, as well as his grandchildren, Christina Longo and her husband, Christopher, Evan Karsberg, Leah Karsberg and Brian Karsberg; as well as several nieces and nephews. Funeral and burial services will be private. Memorial contributions may be made to the Massachusetts Association for the Blind and Visually Impaired. Gifts may be made online at www.mabvi.org/donate. Checks may be made payable to MAB Community Services, and mailed to Andrew Gove, MAB Community Services, 200 Ivy Street, Brookline, MA 02446. Please include “In memory of Richard Karsberg” on your check memo line. To share a memory or offer an online condolence please visit "The Tribute Wall."

The family of Richard M. Karsberg created this Life Tributes page to make it easy to share your memories.

Send flowers to the Karsberg family.