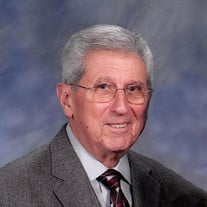 WORCESTER - Richard “Dick” J. Rizkalla, age 90, passed away peacefully on Sunday, November 8, 2020 at his home with his wife by his side. Born in Worcester, MA, Dick was the son of the late Naif K. and Lena (Ghiz) Rizkalla and lived in Worcester his entire life. He graduated from the former Commerce High School in 1948, the New England School of Accounting and Worcester Junior College. Besides great love for his family, Dick’s faith was the driving force in his life. Dick was a life-long member of St. George Orthodox Cathedral and was known throughout the community serving as the organist for the Cathedral for more than 50 years as well as the organist for Multi-Lingual and Pan Orthodox Liturgies held at the former Worcester Auditorium and Mechanic’s Hall in Worcester. He was a member of the St. George Men’s Club and the Syrian Brotherhood Orthodox Society and received the prestigious Antonian Gold Medal of Merit from Metropolitan Philip Saliba, of Thrice Blessed Memory, Primate of the Antiochian Orthodox Christian Archdiocese of New York and North America. Dick very proudly served his country as an Airman in the United States Air Force during the Korean Conflict receiving the Korean Service Medal, the United States Service Medal and the Defense Service Medal. He then became a member of the American Legion Tatnuck Post #288 in Worcester. Dick was a contracting officer for the United States General Services Administration in Boston for 30 years retiring in 1997. Previously Dick owned and operated the former Richard’s Barber Shop at Seven Hills Plaza in Worcester for many years. Dick leaves his wife of 64 years, Gloria (Zakaib) Rizkalla; two sons, Richard J. Rizkalla, Jr. and his wife Maria of Pelham NH and Steven G. Rizkalla and his wife Melissa of Rutland MA. Dick also leaves two daughters; Judith A. Shaughnessy and her husband James of Worcester, Pamela M. Reilly of Holden MA; son in law, John T. Reilly, Sr. of Grafton MA; three grandson’s, Richard J. and James F. Shaughnessy and John T. Reilly, Jr.; three granddaughters, Sarah M. Boutelle and husband Benjamin and Jennifer M. Gingras and husband Jeffrey and Maggie Reilly; three step grandchildren Bayla, Brennen and Griffin Foley and a great granddaughter, Emelia Gingras. Relatives and friends are invited to gather with Dick’s family on Wednesday, November 11th, 2020 from 4:00pm to 6:00pm at Miles Funeral Home, 1158 Main St, Holden MA. The funeral service will be held on Thursday, November 12th, 2020 at 11:00am at St. George Orthodox Cathedral, 30 Anna St, Worcester MA with the Rev. Fr. Milad Selim, Dean of the Cathedral, officiating. Burial to follow at Hope Cemetery, Worcester. The family would like to express their gratitude to Dr. Maria Delrosario and the DaVita Dialysis Center on Shrewsbury St., Worcester MA as well as Dr. Dennis Murphy. In the event you wish to make a donation in Dick’s memory, contributions may be made to St. George Orthodox Cathedral Endowment Fund, 30 Anna Street, Worcester 01604. Appropriate face coverings must be worn during the visitation at the funeral home and when attending the funeral service at the Cathedral. Social distancing must also be honored. As a requirement, there will be no conversation with the family prior to, during, and at the conclusion of the funeral Service in the Cathedral. The funeral service will be live streamed and may be viewed by going to St. George Orthodox Cathedral’s web site www.stgeorgeworcester.org or the Cathedral’s Facebook page. Please follow directions therein. Also the Trisagion Service as well as the military service performed at Hope Cemetery will also be live streamed and may be viewed by clicking here at approximately 12:15 pm: https://client.tribucast.com/tcid/43738829 The services at Hope cemetery may be viewed for up to 90 days. Funeral arrangements are under the direction of Philip G. Haddad, Jr. of Miles Funeral Home, 1158 Main Street, Holden. To share a memory or offer a condolence, please visit the "Tribute Wall" on this page. MAY HIS MEMORY BE ETERNAL

The family of Richard "Dick" J. Rizkalla created this Life Tributes page to make it easy to share your memories.

Send flowers to the Rizkalla family.