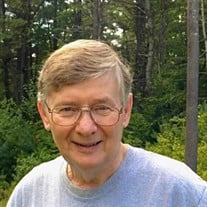 HOLDEN - Dr. Robert F. Champlin passed away peacefully on August 31, 2021, after a lengthy illness. He is joined in heaven by his predeceased wife Fran (Pierce) Champlin, his father Raymond L. Champlin, and his mother Virginia (Sutton) Champlin. Bob is leaving behind a large and extended family. He will be missed by his children Nancy (Champlin) Adamonis, Bob Champlin and wife Trish, Cynthia (Champlin) Rand and husband William, and Tommy Champlin with wife Stephanie along with stepdaughters Tracy and Alison. Bob had several grandkids, Ryan, Tyler, Nicholas, Alexandra, and Liam. He also had 3 great-grandchildren. His sisters Pat McComiskey with husband Joe, Phyliss Tapley, Sandra MacPherson, and Elaine Rodgers will miss him as will his former wife Barbara (Dempsey) Cashell. Born in Boston, MA. August 2, 1939, Bob graduated from Woburn High in 1957 as President of the National Honor Society and had received numerous sports awards. He went on to major in Earth Science at Bridgewater State College, graduating in 1961 and being named into the Bridgewater Athletic Hall of Fame in 1994. Bob moved on to teach in the Lexington public school district from 1961-1966. After receiving his Masters in Science Education at Boston University, Bob moved his growing family to Ohio and graduated from Ohio State University with his Ph.D. in Geology. Accepting a teaching position at East Carolina University, Bob moved his family to North Carolina to begin his long career as a college professor. Dr. Champlin moved his family back to Massachusetts in 1972, accepting a position at Fitchburg State College and teaching there for several decades until his retirement in 2002. Throughout his colorful career “Dr. C”, as he was known to his students, led geological field trips throughout North America and participated in or led vertebrate fossil expeditions in Utah, Colorado, Wyoming, and Mexico. His nickname was “Indiana Bob” and he definitely fit the role! Bob was also awarded numerous outstanding teacher awards and held several prestigious positions over the course of his career. He served as Chairperson of the Geophysical Sciences Department at FSU and was President of the New England Section of the National Association of Geology Teachers to name a couple. Only recently did he discontinue part-time teaching at FSU. Bob also moonlighted as the sports editor of the local newspaper the Holden Landmark for 17 years, a position that he immensely enjoyed! Dr. Champlin relocated to Cape Cod in Dennis, MA with his wife Fran upon retiring from FSU in 2002 and served as president of the Dennis Golf Association and Vice Chairman of the Dennis Water Quality Commission. Dr. Champlin and his wife Fran relocated to Templeton, MA several years later where they enjoyed their blended family. Bob and Fran traveled the globe together and loved spending time with family. Bob also loved his garden and was an avid golfer. He registered 5 holes in 1 during his long career! Upon his wife Fran’s passing, Bob moved back to Holden to be closer to his children, grandkids, and great-grandkids. There was nothing he loved more than watching his family and extended family participating in their various activities. He rarely missed one. Bob was always an active member of his community youth sports programs and coached in various Little League and basketball leagues. His latest stint was coaching basketball with son Bob at Mountview Middle School while continuing to impact the lives of kids and winning over their hearts! Bob loved his annual “guys only” camping trips to the New Hampshire White Mountains with sons, grandsons, and many friends. He was also a founding member of the ROMEO Club (Retired Old Men Eating Out) and cherished those times with his friends. Dr. Champlin, affectionately called “Doc” or “Funny Bob” by some, will be forever missed in the hearts and souls of the many lives he affected along his journey through life. Family and friends, please join us in a celebration of Bob’s life at Leo’s Ristorante on 11 Leo Toro Way, Worcester, MA 01604 this Sunday, 9/5/21 from 1:00 to 4:00 PM. To share a memory or offer a condolence please visit "The Tribute Wall" on this page.

The family of Dr. Robert F. Champlin created this Life Tributes page to make it easy to share your memories.

Send flowers to the Champlin family.