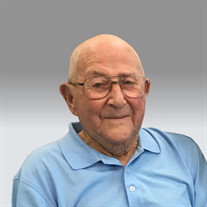 STERLING – Robert F. Cutler, Sr., 92 passed away on Friday, September 17, 2021, at UMass Memorial Health Alliance - Leominster Hospital. Born in Holden, Bob was the son of Richard H. and Viola M. (Kennedy) Cutler and lived his entire life on his family’s farm in Sterling. After graduating from Leominster High School in 1947, Bob enlisted in the United States Army and honorably served his country during the Korean War. Returning home from the service in 1953, Bob went to work as a self-employed contractor and later as an insurance agent for John Graves Insurance Agency in Princeton. Bob spent most of his working career as the superintendent of the Sterling Department of Public Works, retiring in 1996. Bob truly loved living in his hometown of Sterling and felt blessed and honored in volunteering his time and talent to his community. He served two terms as a Sterling Selectman and eight years as a member of the Board of Assessors. He was a member of the Hiram O. Taylor American Legion Post 189 in Sterling and proudly served as a former Commander. He was a man of integrity and a “no-nonsense” kind of guy who is remembered as saying, “Say what you mean and mean what you say”. He was truly a great man whose impact will forever be felt by the family that loves him dearly and knows that they will see each other again. He was a selfless man whose passing has left a hole that only he can fill. His ability to love, sacrifice, provide, support and forgive will forever be lessons to all he knew. At the end of the day, Bob’s favorite place to be was back at his family farm with his family and beloved animals. Bob is survived by his seven children, Robert F. Cutler, Jr and his wife, Lisa, Keith H. Cutler and his wife, Julie, Randell L. Cutler, Kelly A. Coughlin, and Joyce L. Cutler all of Sterling, Ami E. Cutler of Providence and Jason I. Cutler of Las Vegas; three sisters, Elizabeth Hendrickson of Sterling, Janet Chapman of West Boylston and Linda Densmore of Sterling; 13 grandchildren; 11 great-grandchildren; nephews and nieces. Besides his parents, Bob is predeceased by a granddaughter, Ginnie Cutler, and a sister, Nancy Townsend. Relatives and friends are invited to visit with Bob’s family from 4 to 7 pm on Thursday, September 23, at Miles-Sterling Funeral and Tribute Center, 100 Worcester Road (Rte. 12), Sterling. A graveside service with military honors will be held at 11 am on Friday, September 24, at Hillside Cemetery in Sterling. The Rev. Michelle Grube will be officiating. In lieu of flowers, memorial donations may be made to the Hiram O. Taylor American Legion Post 189, P.O. Box 245, Sterling, MA 01564. To share a memory or offer a condolence, please visit the "Tribute Wall" on this page.

The family of Robert F. Cutler, Sr. created this Life Tributes page to make it easy to share your memories.