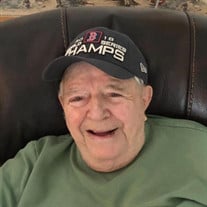 PAXTON/SPENCER - Robert E. MacDonald, 90, passed away on Monday, September 6, 2021, at Brookhaven Assisted Care. He was born in Worcester, the son of Eldon R. and Jean W. (Fowler) MacDonald and graduated from Worcester Academy in 1950. Bob enlisted into the US Navy reserves in 1948 before being called into active duty in 1952. He served aboard the U.S.S. Fiske (DDR 842) during the Korean Conflict until 1954 when he was honorably discharged. He was a salesman at New England Telephone and AT&T for 34 years before retiring in 1985. Bob was devoted to his family and enjoyed gardening, fishing and many trips to their summer home in New Brunswick, Canada. Bob's loving wife of 65 years, Jane M. (Dickman) MacDonald, passed away on March 27, 2021. He leaves his daughters, Patricia Clark and her husband, Paul of Hubbardston, Cindy Carbonneau and her husband, Daniel of Oxford, Pamela MacNutt and her husband, James of Saxtons River, VT and Kimberly Sterste and her husband, Edward of Belchertown; his grandchildren, Steven Carbonneau, Michael Carbonneau and his wife, Nicole, Sherry Walsh and her husband Joey, Paul Clark, Karen Clark, Toby MacNutt, Victoria Roudabush and her husband, Aaron, and Nicole Sterste; his great-grandchildren, Luke and Laci Carbonneau, and Liam Roudabush; and many nieces and nephews. Funeral services for Bob and Jane will be held privately at Worcester County Memorial Park in Paxton. In lieu of flowers, memorial contributions may be made to a charity of one's choice. Arrangements are under the care of the Miles Funeral Home, 1158 Main Street, Holden. To share a memory or offer an online condolence, please visit the "Tribute Wall" on this page.

PAXTON/SPENCER - Robert E. MacDonald, 90, passed away on Monday, September 6, 2021, at Brookhaven Assisted Care. He was born in Worcester, the son of Eldon R. and Jean W. (Fowler) MacDonald and graduated from Worcester Academy in 1950. Bob... View Obituary & Service Information

The family of Robert E. MacDonald created this Life Tributes page to make it easy to share your memories.

Send flowers to the MacDonald family.