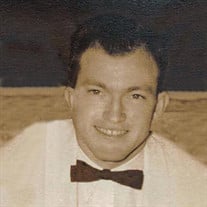 To view Robert's funeral Mass and Graveside service, please click here: https://client.tribucast.com/tcid/42756353 Princeton - Robert Melvin Marsh, 89, passed away on November 27, 2020. He was born August 22, 1931, the son of Melvin Clinton Marsh and Helen Francis (Lindsay) Marsh and was the beloved husband of Jeannette (Kilinskas) Marsh of Princeton. He leaves four sons, Robert A. Marsh of West Boylston, Michael K. Marsh of Portland Maine, David B. Marsh of Princeton and Richard S. Marsh of Oxford; fourteen grandchildren, Patrick, Kaitlyn, Corey, Brandon, Jeremy, Jonathan, Cedric, Allison, Brien, Timothy, Denali, Rachel Blessington, Laura and Andrew; three great grandchildren; his sister, Carol Kletotka of South Carolina and sister-in-law, Nancy Marsh of Vermont. He was pre-deceased by his brother Donald earlier this year. Robert graduated from Oxford High School in 1949 and subsequently attended Worcester Boys Trade specializing in drafting. From June 1951 through July 1954 he served in the Coast Guard and was deployed on the USCGC White Heath as a diesel engine operator. In 1955, he married Jeannette Kilinskas and settled in Manchester, Connecticut until they moved to Princeton 60 years ago. Robert was employed by Pratt and Whitney and later joined Raytheon in Sudbury as a draftsman. He was on the Princeton Planning Board for many years and also a member of the Massachusetts Christmas Tree Growers Association. Robert enjoyed hunting and fishing with his brother, Don and family members. He operated both a Christmas tree farm and road side fruit and vegetable stand for over fifty years. Relatives and friends are invited to gather with Robert's family from 9:15 to 10:15 a.m. on Thursday, December 3rd at Miles Funeral Home, 1158 Main St., Holden. A Mass of Christian Burial will be celebrated on Thursday at 11 a.m. at Prince of Peace Church, 1 Worcester Road, Princeton. Burial will follow at Worcester County Memorial Park, 217 Richard's Ave., Paxton. In lieu of flowers, the family requests that any donations be made to Beacon Hospice, 36 Williams Street, Leominster MA 01453. To share a memory or to offer an online condolence, please visit the "Tribute Wall" on this page.

The family of Robert M. Marsh created this Life Tributes page to make it easy to share your memories.

Send flowers to the Marsh family.