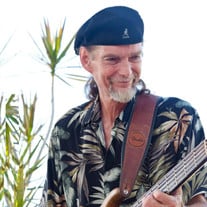 CHARLTON / FOXBORO / ST. LUCIE, FL - Robert L. "Bones" Moltedo, 65, a beloved musician and spreader of joy, died peacefully on Tuesday, January 19, 2021 at UMass Memorial Healthcare - University Campus, Worcester after a battle with cancer. He was born and raised in Foxboro, the son of Lawrence E. and Helen E. (Bastberg) Moltedo. Bob fell in love with music at a young age. He picked up the bass in his early teens and decided that making music and delivering groove to the hearts and souls of audiences around the country would be his life's work. "Bones", a moniker he picked up early in his career, started playing gigs in high school and went on to work with a number of bands in the Worcester area including Big Dawg, Down East, 9Teen, The Infractions, and Betsy Listenfelt. Bob married the love of his life, Donna M. (Wennerstrand) in 1985. They lived in central MA until 2007 when they moved to the Treasure Coast of Florida. While there, Bones was well renowned for his bass playing and vocals in bands such as Mercury, Sister Baby, Big Coque, Jason Montero, Joe Santana's Kingfish, and Stones Clones. Bones enjoyed bringing people together around a shared love of music. He was well known among friends and acquaintances for supporting and encouraging other musicians and building a thriving musical community wherever he went. He and Donna made the difficult decision to move back to MA last year to be with their children during his battle with cancer. Family, by blood or band, was central to Bob’s life; they were his biggest supporters and his source of inspiration. He is survived by his beloved wife of 35 years, Donna M. (Wennerstand) Moltedo; his son, Chase Moltedo; his daughter, Larissa Moltedo; and his sister, Laurel Merkley. There are no services planned at this time. Miles Funeral Home, 1158 Main St., Holden is assisting the family with arrangements. In lieu of flowers, memorial contributions may be made to Little Kids Rock, https://www.littlekidsrock.org/support-us/donation/. To share a memory or offer a condolence visit the "Tribute Wall" on this page.

The family of Robert L. "Bones" Moltedo created this Life Tributes page to make it easy to share your memories.

Send flowers to the Moltedo family.