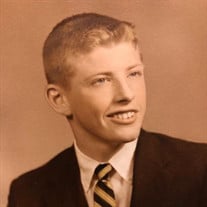 CAPE ELIZABETH, ME/PROVIDENCE, RI - On Wednesday, August 4, 2021, we lost a wonderful, caring husband, father, and friend; Robert Carlton Patton, Jr. Bob, as he was known to all, died in his sleep after a long battle with dementia. He is survived by the love of his life, Ann DeGoey Patton, his son, Robert C Patton III of Marlboro, MA, and his daughter, Jennifer Patton Robbins of Holden, MA as well as two grandsons; Ethan and Eli Robbins. Bob was born and raised in Rhode Island and lived most of his adult life in Cape Elizabeth, Maine. He often spoke of his time at St. Dunstan’s primary school with long-time good friend Billie Lunnie. He attended Hope High School in Providence, RI where his main sports were wrestling and pole vault. He continued pole vaulting when he attended URI and held records there for years after graduating. Bob met his soulmate, Ann Muriel DeGoey in seventh grade at dancing school (another of his favorite stories) and they dated for most of junior high, high school, and college. They married on July 21, 1962, and never slept apart unnecessarily for their 59-year marriage. Bob and Ann had two children; Robbie and Jennifer, and Bob relished any and all time spent with his family. He especially enjoyed watching his children and grandchildren playing sports. Bob’s favorite thing to do was read about, watch and play his beloved game of golf. He was fortunate to work in the golf business as a sales representative starting in his early thirties and continuing until he stopped working in 2014. He played golf on the Emerald Isle both with his wife and his son and at Pebble Beach when he worked for MacGregor Golf. But his most talked about golf game was when he played with “Bush 41” at Cape Arundel in Kennebunk, ME. Bob was at his happiest when he was playing golf, particularly when he was playing with family, and is undoubtedly teeing it up at the “Augusta National in the sky.” A celebration of Bob’s life is in the planning stages. In lieu of flowers, donations can be made to alz.org to further research in Alzheimer’s and dementia. Funeral arrangements are under the care of Miles Funeral Home, 1158 Main St., Holden, MA. To share a memory or offer condolence, please visit the "Tribute Wall" on this page.

CAPE ELIZABETH, ME/PROVIDENCE, RI - On Wednesday, August 4, 2021, we lost a wonderful, caring husband, father, and friend; Robert Carlton Patton, Jr. Bob, as he was known to all, died in his sleep after a long battle with dementia. He is survived... View Obituary & Service Information

The family of Robert Carlton Patton, Jr. created this Life Tributes page to make it easy to share your memories.