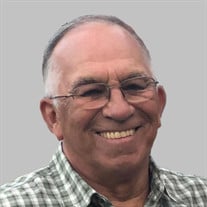 WORCESTER – Roger F. Comeau, loving husband, father, grandfather, brother, and friend passed away suddenly on Friday, January 8, 2021, at UMass University Campus in Worcester. He was 72. Born in Worcester, Roger graduated from Worcester Boys Trade High School and soon after joined the United States Coast Guard, serving on the USCG Castle Rock. After the Coast Guard, Roger worked for over 40 years as a Master Plumber, eventually owning his own business, “Roger F. Comeau Plumbing & Heating”. He then went on to work as a UPS delivery driver, a job that he treasured. A “regular” guy, Roger was a hard worker who enjoyed board games, Sudoku, deep-sea fishing, and day trip adventures. His real joy came from time spent with his family. While raising his two daughters, Roger never missed an opportunity to watch his girls dance or cheer performances. This dedication has continued with his grandchildren as he attended every soccer and baseball game, practice, school show, concert, pageants, and recitals. He looked forward to the annual recital of the Greendale Dance Academy where he was a mainstay backstage. Handyman extraordinaire, Roger could fix anything. He loved to pass on his knowledge to his sons-in-law whom he referred to as “the boys” and never as in-laws. When asked about the possibility of a project, the answer was always “We can do anything.” Roger met the love of his life, Helen Whitney, while in the Coast Guard. The two quickly fell in love and were married for over 48 years. He will be lovingly missed by his wife, Helen Comeau; daughters, Melissa Singley and her husband, Peter of Holden; Rev. Dr. Megan Leary and her husband, William of Worcester, grandchildren, Ryan Singley, Rebecca Singley, Connor Leary, and Patrick Leary; siblings, George Comeau and his wife, Bonnie-Jean of Spencer, Carol Troiano and her husband, Anthony of Oxford; Richard Comeau and his wife, Melba of Brookfield; and Susan Dufresne of Auburn; and many nephews and nieces. His canine friend Dolly will miss watching tv with him in the evening as well. A service will be held at a later date. In lieu of flowers, memorial donations in his name may be made to Teamsters 170 Scholarship Fund, 330 SW Cutoff #202, Worcester, MA 01604. Funeral arrangements are under the care of Miles Funeral Home, Greater Worcester Funeral Care. To share a memory or to offer an online condolence, please visit the "Tribute Wall" on this page.

The family of Roger F. Comeau created this Life Tributes page to make it easy to share your memories.

Send flowers to the Comeau family.