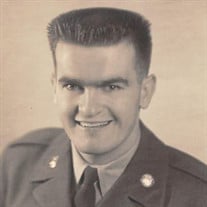 STERLING - Roland A. Nelson, Jr., 88, died peacefully on Monday, August 2, 2021 at Leominster Hospital. He was born in Worcester, the son of Roland and Ruth (Lawless) Nelson. Roland lived in Sterling for the last 61 years, where he raised his four children and was an active member of the community. Roland was predeceased by his beloved wife of 58 years, Mary Ann (O'Keefe) Nelson in 2018. He will be lovingly missed and remembered by his son, James Nelson of Westminster and his wife, Lori; his daughters, Katherine (Nelson) Sullivan, and Linda (Nelson) Dube and her husband, Michael of Sterling; his brother, Russell Nelson of Millbury and his wife, Louise; his sister, Ruth Goshn of Washington State; six grandchildren; as well as several nieces and nephews. Roland was also predeceased by his son, Peter R. Nelson; his brother, David Nelson; his sister, Judy Nelson; his daughter-in-law, Betsy Nelson and his son-in-law, Thomas Sullivan. Roland was a proud patriot who devoted his life to his family, community and his fellow Veterans. He grew up in Lancaster and graduated from Lancaster High School in 1951. Roland went on to work as a Book Binder for Colonial Press and Nimrod Press for 40 years. He proudly served in the U.S. Army as a cryptographer in the Korean War and would later serve as Veteran's Affairs Officer for the towns of Sterling and Lancaster. Roland was a long time active member of Hiram O. Taylor American Legion Post 189, where he leaves many close friends. As a member of Wilder Lodge A.F. & A.M., he served as a Past Master Mason. He was also a member of the First Church in Sterling where he served as a deacon for many years. An active gardener, Roland also enjoyed having coffee with his close friends and cherished the time he spent with his grandchildren. Relatives and friends are invited to attend calling hours from 4 to 6 p.m. on Thursday, August 5, 2021 at Miles-Sterling Funeral and Tribute Center, 100 Worcester Rd., Sterling. A private burial will be held at the Massachusetts Veterans’ Memorial Cemetery in Winchendon. In lieu of flowers donations may be sent to the Town of Sterling Fire Department, Ambulance Fund, P.O. Box 515, Sterling, MA 01564. To share a memory or offer a condolence please visit "The Tribute Wall."

STERLING - Roland A. Nelson, Jr., 88, died peacefully on Monday, August 2, 2021 at Leominster Hospital. He was born in Worcester, the son of Roland and Ruth (Lawless) Nelson. Roland lived in Sterling for the last 61 years, where he raised his... View Obituary & Service Information

The family of Roland A. Nelson Jr. created this Life Tributes page to make it easy to share your memories.

Send flowers to the Nelson family.