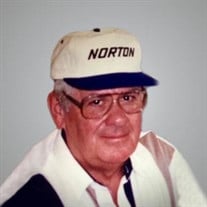 AUBURN – Ronald E. MacIlvane, 86, passed-away peacefully surrounded by his loving family on Wednesday, January 6, 2021 at the Life Care Center of Auburn. His beloved wife of 66 years, Marie (Richards) MacIlvane, passed-away on October 21, 2020. Born and raised in Worcester, Ronald was a son of George and Doris (Stone) MacIlvane. He graduated from Worcester Boy’s Trade High School and went on to enjoy a long career with Norton Company, retiring in 1991 after 33 years of dedicated service. He proudly served his country in the Navy Ready Reserves for over 33 years. Ronald and Marie lived in Punta Gorda, Florida for over 30 years before moving to Eddy Pond West in Auburn. In his younger years he could often be found playing dominos, boating or taking Marie on a Sunday drive. He will be lovingly missed and remembered by his son, Kevin MacIlvane and his wife, Cathy of Lady’s Island, SC; his three daughters, Karen Griffin and her husband, Peter of Holden, Bonnie Kenney and her husband, Kevin of Punta Gorda, FL and Tammie Smiley and her husband, David of West Boylston; his faithful pal Bella (Ron’s Dog); his brother, Gerald MacIlvane and his wife, Myrna of Pinellas Park, FL; four grandchildren, Katelyn Craig, Kevin MacIlvane, Joseph Kenney and Kara Kenney; and four great-grandchildren, Jackson Craig, Kellen Craig, Luca MacIlvane and Mila MacIvane. Funeral services are private and will be held at the convenience of the family. Arrangements are under the care of the Miles Funeral Home, 1158 Main Street, Holden. To share a memory or offer a condolence please visit "The Tribute Wall."

The family of Ronald E. MacIlvane created this Life Tributes page to make it easy to share your memories.

Send flowers to the MacIlvane family.