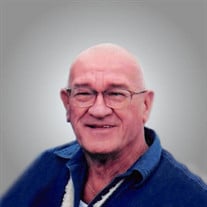 BARRE - Russell B. "Skip" Gunnarson, 88, died peacefully at home on Sunday, January 24, 2021 surrounded by his family. He was born in Concord, NH, the son of Harold and Inez (Hallberg) Gunnarson and had lived in Worcester and later Barre, for many years. Skip grew up in Worcester and attended Worcester Schools. He enlisted in the U.S. Navy and proudly served during the Korean War aboard the U.S.S. W.C. Lawe. After returning from his military service Skip married the love of his life, Marie L. (DeMarco) and eventually settled in Barre, where they lived for 48 years. For over 30 years Skip worked in maintenance for George Meyer Co. and later Jamesbury Co. and the Quabbin Regional School District. He enjoyed gardening; fishing and spending time with his family. Skip was also a member of the South Barre Rod and Gun and the American Legion Post 2. Skip will be lovingly missed and remembered by his wife of 60_years, Marie L. (DeMarco) Gunnarson; his daughters, Lisa Besaw and her husband, Garry of Barre and Linda Downing and her husband, Jerry of Gardner; his brother, Jackie Gunnarson and his wife, Judy of Rutland; his sisters, June Carelli of Worcester and Phyllis Gunnarson of Worcester; his grandchildren, Amber Duval and her fiance, Jeremy, Sheena Fargnoli and her husband, Todd and Misty Thorpe and her husband, Sean; his great grandchildren, Lane, Kenzie, Isla, Jorja, Hazel, Cadence and Gwen; as well as several nieces and nephews. Skip was predeceased by his grandson, Joe Duval. Funeral services are private and under the care of Miles Funeral Home, 1158 Main St., Holden. Memorial contributions may be made to Veteran's Inc., 69 Grove St., Worcester, MA 01605. To share a memory or offer a condolence visit "The Tribute Wall."

BARRE - Russell B. "Skip" Gunnarson, 88, died peacefully at home on Sunday, January 24, 2021 surrounded by his family. He was born in Concord, NH, the son of Harold and Inez (Hallberg) Gunnarson and had lived in Worcester and later Barre, for... View Obituary & Service Information

The family of Russell B. "Skip" Gunnarson created this Life Tributes page to make it easy to share your memories.

Send flowers to the Gunnarson family.